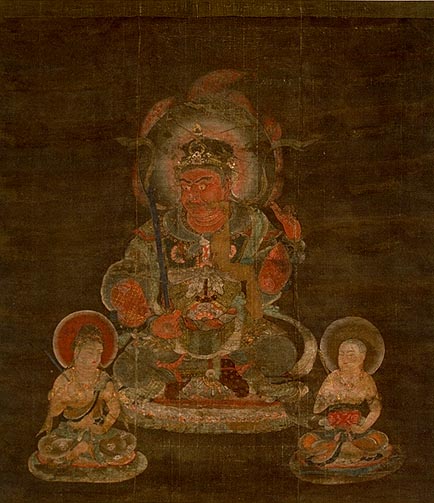 Rasetsu-ten is one of the Twelve Devas that were made in 1127 to be hung at the annual, New Year's ceremony of esoteric prayers, held at Shingon-in in the Imperial Palace. They were formerly owned by Kyoogokoku-ji (To-ji) Temple.

The twelve devas are the guardians of the four quarters and four semi-quarters, up and down, and the sun and moon. Rasetsu-ten guards the southwest semi-quarter. In his right hand he holds a sword; his left hand is held in the "sword" mudra (symbolic hand position).

The three figures in this painting are depicted with a unique painting style in an clean composition. The two attendants, with their highly slanted eyes, are particularly charming. The fiery halo and the bird and animal motifs on the cloth give this work special appeal.