Some of you may think that even the word for Buddhist scripture, "sutra," is difficult. But the sutra I will introduce here includes illustrations and pictorial explanations.

This sutra is called the Sutra of Cause and Effect in the Past and Present (J., Kako genzai inga kyo), more commonly known as the Illustrated Sutra of Cause and Effect (J., E inga kyo). The words of the sutra are copied in the lower half, while the upper half illustrates representative scenes described below. The story begins with the training of the historical Buddha Sakyamuni in his past lives, how he was freed suffering and delusion, and how he achieved enlightenment and became the Buddha. In other words, this sutra is somewhat like the Buddha's biography.

Putting aside these tales of his previous lives, Sakyamuni himself was born about 2,500 years ago in India as a prince, named Siddhartha. His family name was Gautama. His father was Suddhodana, the ruler of a small kingdom called Kapilavastu (on the boarder of present-day Nepal and India); his mother was Queen Maya. According to legend, he was born in the nearby garden of Lumbini. As a prince, Siddhartha spent his childhood and youth in comfort.

This sutra from Jobon Rendai-ji Temple in Kyoto starts from around the time the prince was ten years old. The young Siddhartha spent his time competing in skill and strength against his cousin Devadatta and his half-brother Nanda and always winning. The illustration here captures such a scene that demonstrates the prince's amazing abilities. 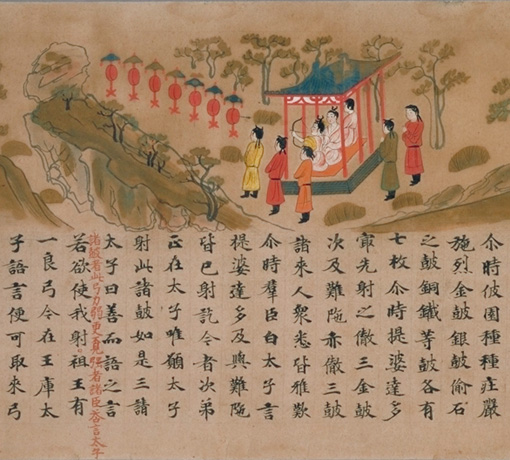 Here, Siddhartha is about to shoot seven drum-shaped targets made of gold and silver. Since there are seven targets, at least seven arrows would usually be needed to hit all of them, but Siddhartha hits all seven with a single arrow!

According to legend, Prince Siddhartha one day ventured out of his castle from four gates-in the directions of east, south, west, and north-and on each occasion he encountered an old man, a sick man, a dead man, and a spiritual man. The image below represents the scene in which the prince leaves the castle from the south gate to see a sick man. The prince, who had been protected from the outside world, was deeply struck by this sight of illness, as he had never seen a sick person before.

The sutra also captures several other interesting scenes such as Siddhartha competing in a wrestling match and plowing a field to demonstrate his strength. The sutra itself was copied in a beautiful kaisho (formal style of calligraphy) in Japan during the Nara period (710-793). The colors used to paint the illustrations even today are surprisingly brilliant. Moreover, this manuscript not only represents one of the few existing examples of painting from the Nara period, but also served as the prototype of emaki (illustrated handscrolls), which became popular from the Heian period (710-793) on. Finally, there are very few eighth-century sutras from the East Asian Buddhist countries of China, Korea, and Japan that are illustrated and that are as well preserved as this wonderful work.