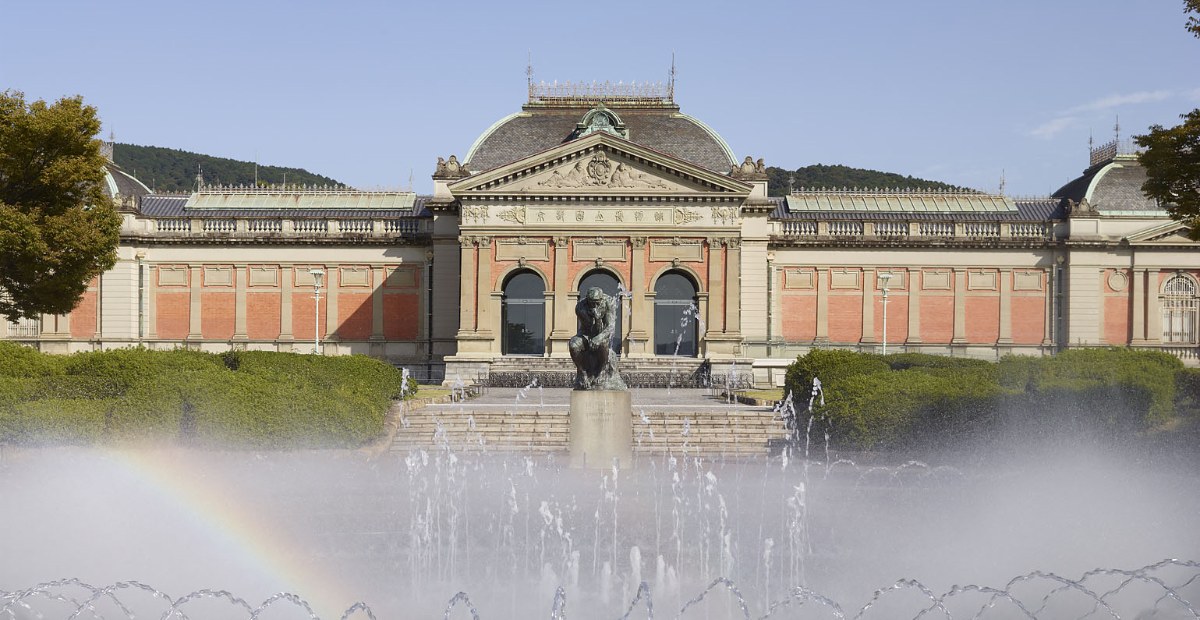 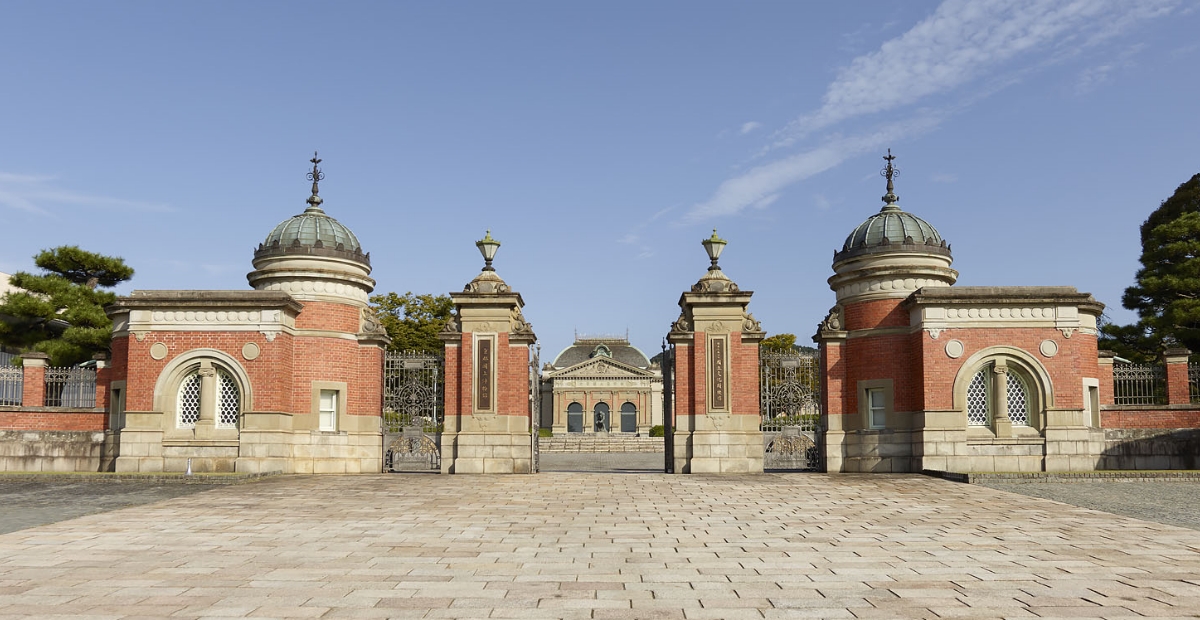 The Meiji Kotokan opened on May 1st of 1897 as the Imperial Museum of Kyoto. The building was designed by Katayama Tokuma (1854-1917), a leading architect for the Imperial Household Ministry. Katayama's design incorporated an outward façade based on French Renaissance and Baroque styles that incorporated Japanese aesthetic sensibilities of lyricism and elegance. At the time of its building, some argued that Western-style architecture was inappropriate for a major building in Japan's ancient capital, Kyoto, but today the Meiji Kotokan is considered a defining feature of the city's landscape and history, fully compatible with the temples and shrines of the surrounding Higashiyama district. The building was designed with a strong sense of symmetry, with a foyer at the center, a large central hall, and ten exhibition galleries surrounding courtyards on either side.
In 1959, the original structures of the former Imperial Museum of Kyoto (the Main Hall and the Main Gate with its adjacent ticket offices) were collectively designated as an Important Cultural Property.

*The Meiji Kotokan has been closed since 2015 in preparation for seismic upgrades.
*The Main Gate is currently not in use. 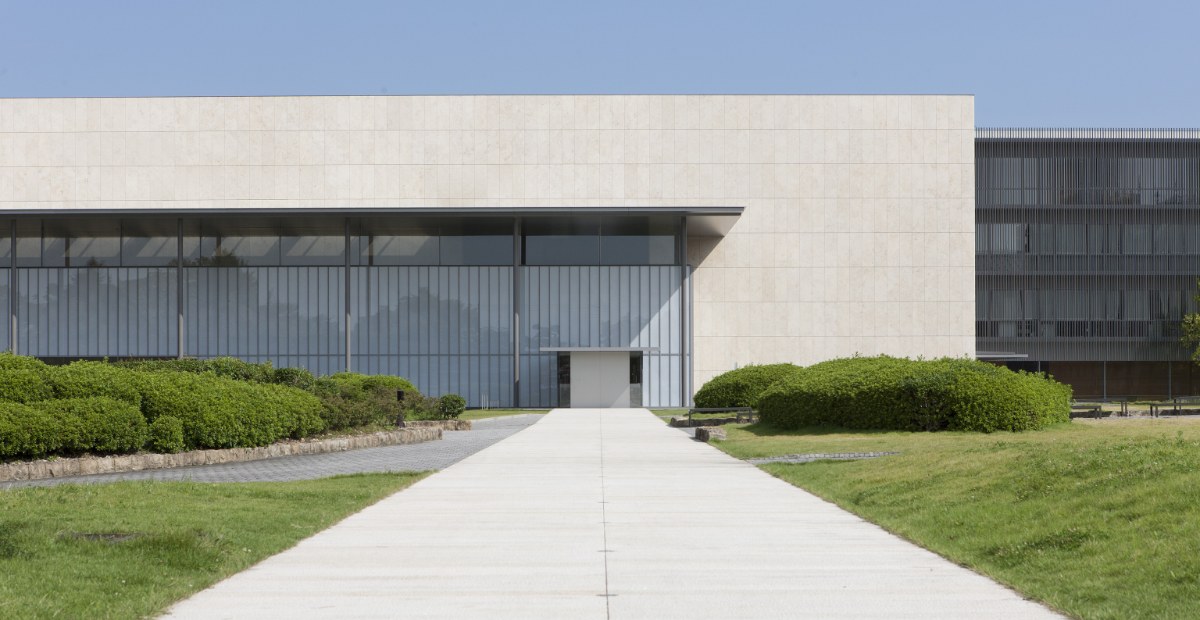 A museum for the twenty-first century

The Heisei Chishinkan Wing is designed by internationally acclaimed architect Taniguchi Yoshio--known for his design of the Gallery of Hōryū-ji Treasures at the Tokyo National Museum and his redesign of the Museum of Modern Art in New York.
The Heisei Chishinkan's architecture has a linear theme inspired by the spatial configurations of traditional Japanese architecture.
Among the many appealing features of the new facility are the spacious front lobby, which envelops visitors in soft natural light; earthquake mitigation systems protecting the entire building as well as individual artworks; an auditorium incorporating the latest projection technology; and a restaurant overlooking the museum's West Garden. 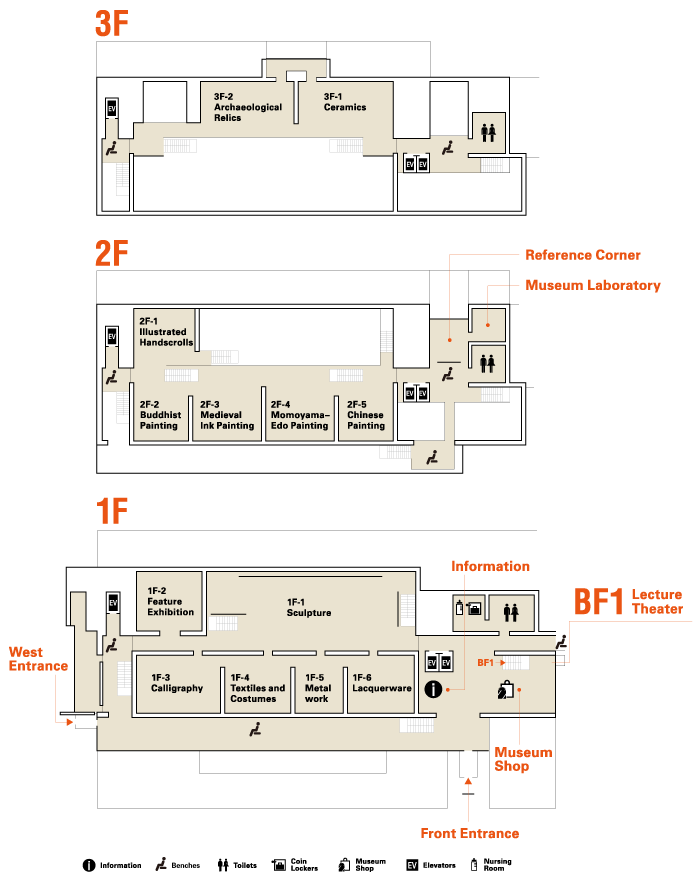 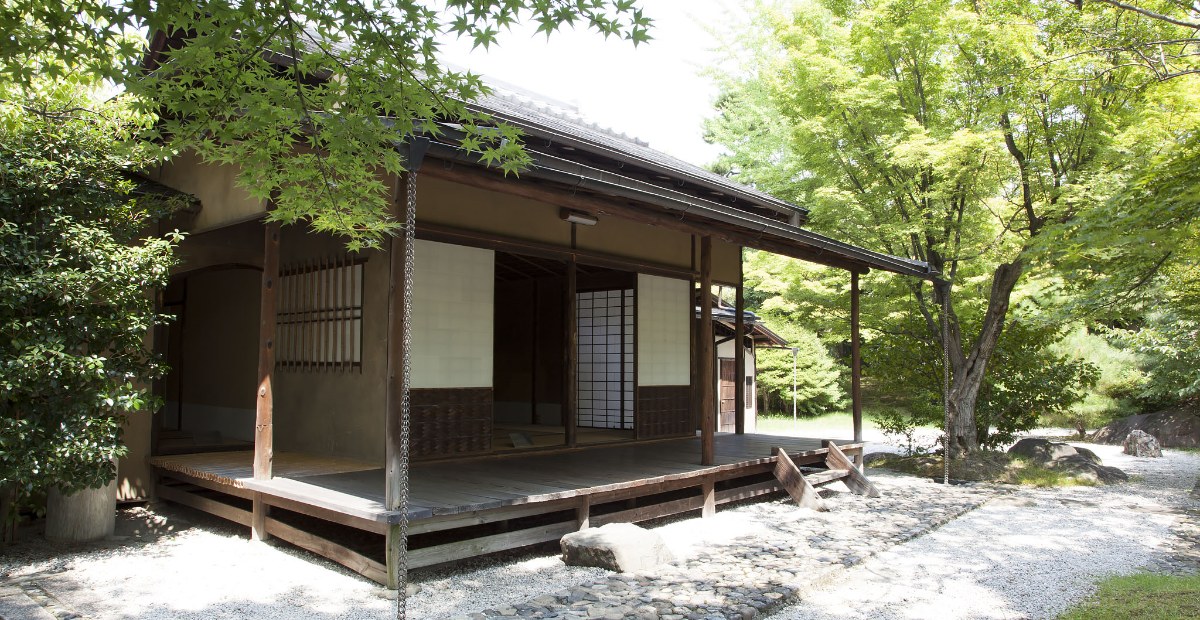 The Kyoto National Museum's tea house is built in the sukiya architectural style popular among Kyoto aristocrats at the beginning of the Edo period (1615-1868). It was constructed on the museum grounds in 1958 with the support of the industrialist Ueda Tan'ichirō (Tan'an, b. 1906).

To the right of the entrance hall (genkan) in the main hall is a large, eight-mat tearoom (hiroma) with a broad veranda (hiroen) across the front and a preparation room (mizuya) in the rear. The harmony of the architectural space and the surrounding garden, the lightweight construction of the roof, and the use of subdued dark woods show the influence of Katsura Imperial Villa, whose construction began in the 1620s.

On the right side of the main building is the most important room in the complex: a smaller three-mat tearoom (koma) named Tan'an, which is entered from an interior earthen-floored space (doma). It is built in a style favored by the tea master Kanamori Sōwa (1584-1656) and replicates the tearoom Teikyokken in Shinju-an, a subtemple of the Kyoto Zen temple Daitoku-ji. Its layout is in the hongatte daimegiri (dero) style with a lacquered decorative molding (kamachi) across the front of the raised (jōdan) geza-doko alcove.

In 1966, the teahouse was moved from the south side of the brick Meiji Kotokan to its present site. At that time, the original thatched roof of the Tan'an tearoom was replaced with copper shingles, and the tea garden and the structure behind the mizuya were added. The tearoom is used for various tea gatherings and is available for rental. 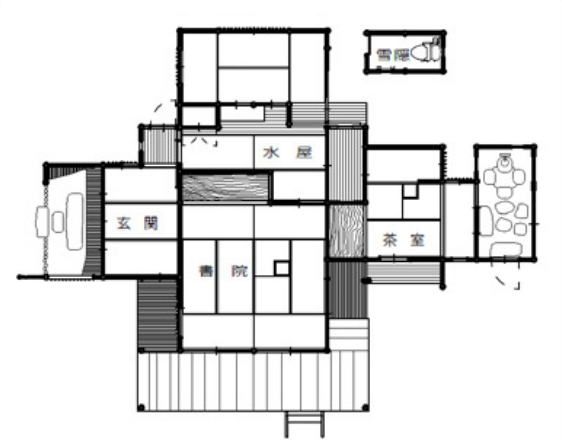 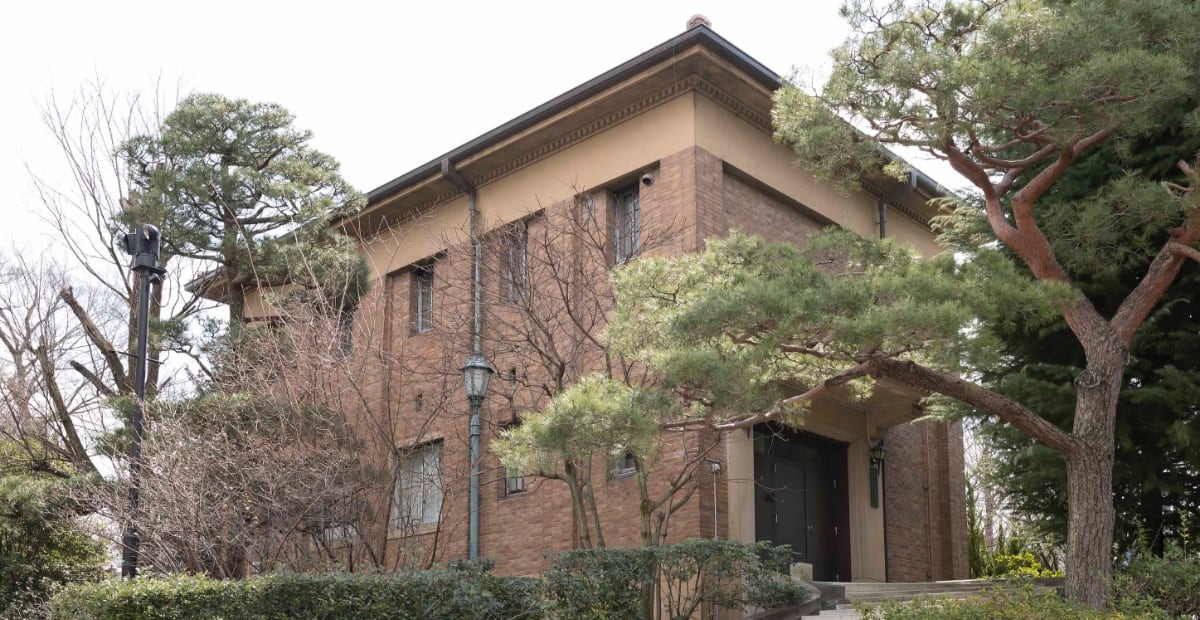 An elegant Western-style building from the early Showa period

This structure was constructed as an art storage facility in 1930, when the Kyoto National Museum was known as the Imperial Gift Museum of Kyoto. The building's handsome and rhythmic exterior is designed with a scratch tile façade, large square windows on the south side, and vertical windows on each floor of the north side. It was designated a National Registered Tangible Cultural Property in 2008.

Not open to visitors 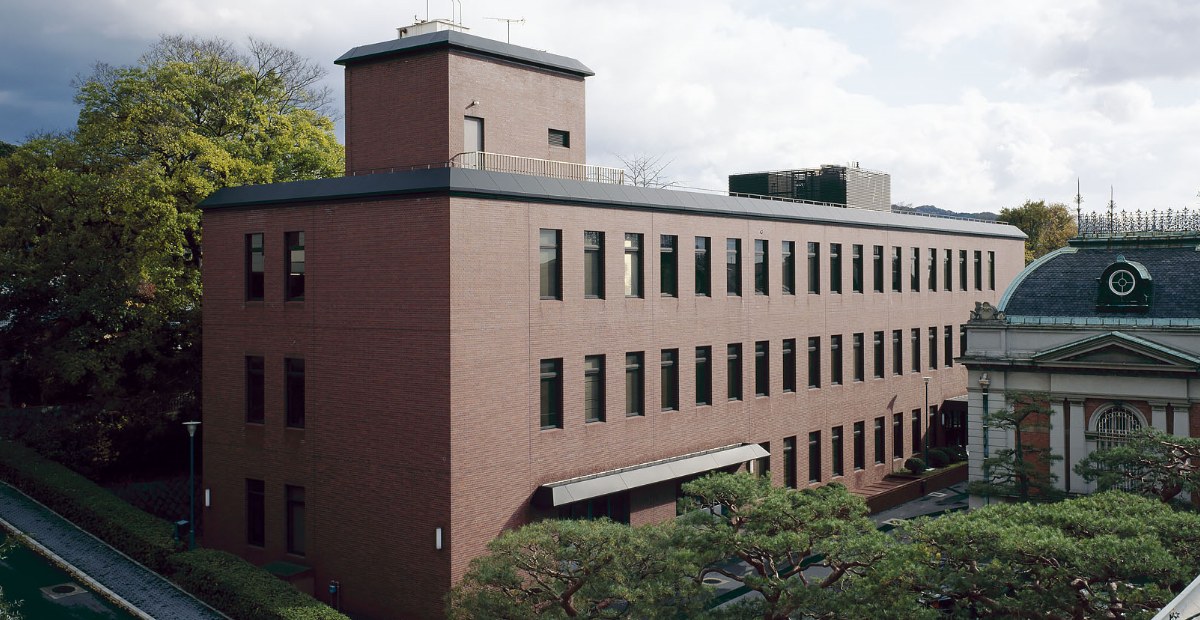