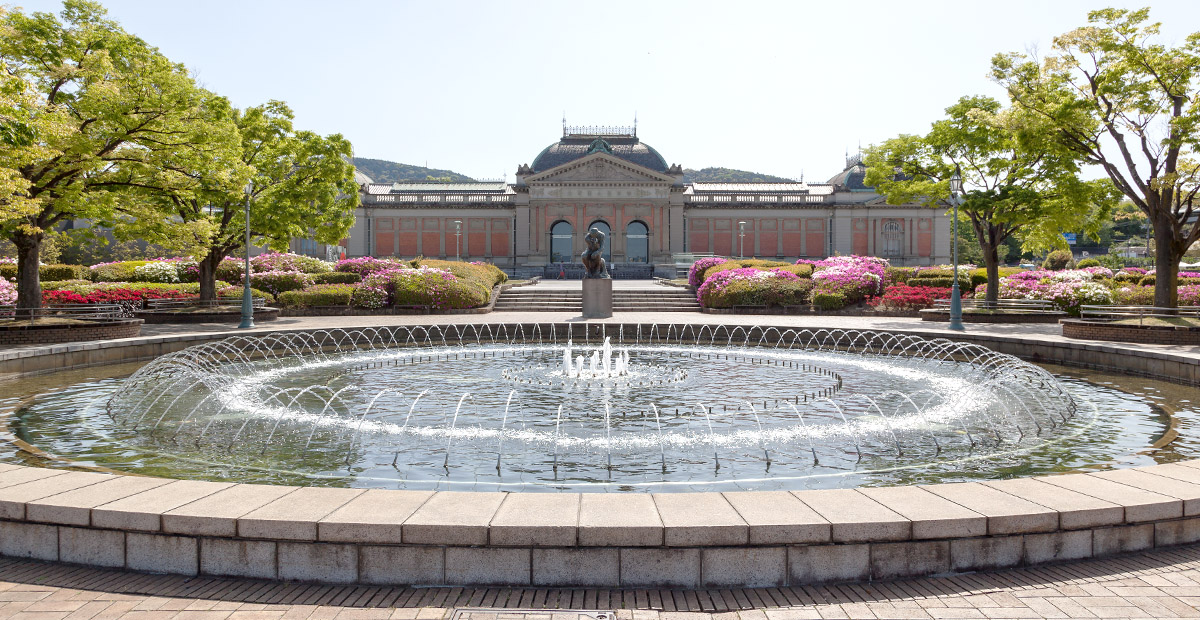 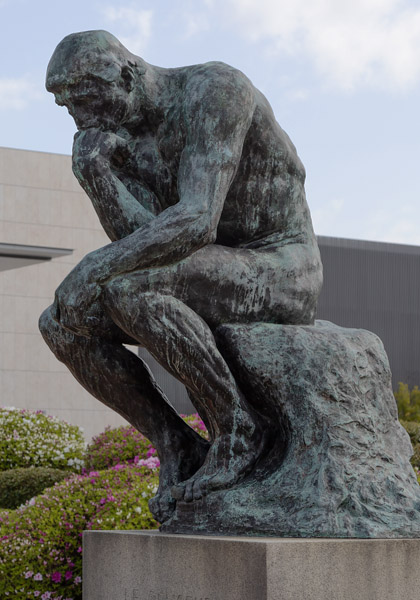 The Thinker, one of Auguste Rodin's most famous sculptures, was originally a part of his Gates of Hell. Although there are several examples of The Thinker, this work was cast at an early stage of its production. 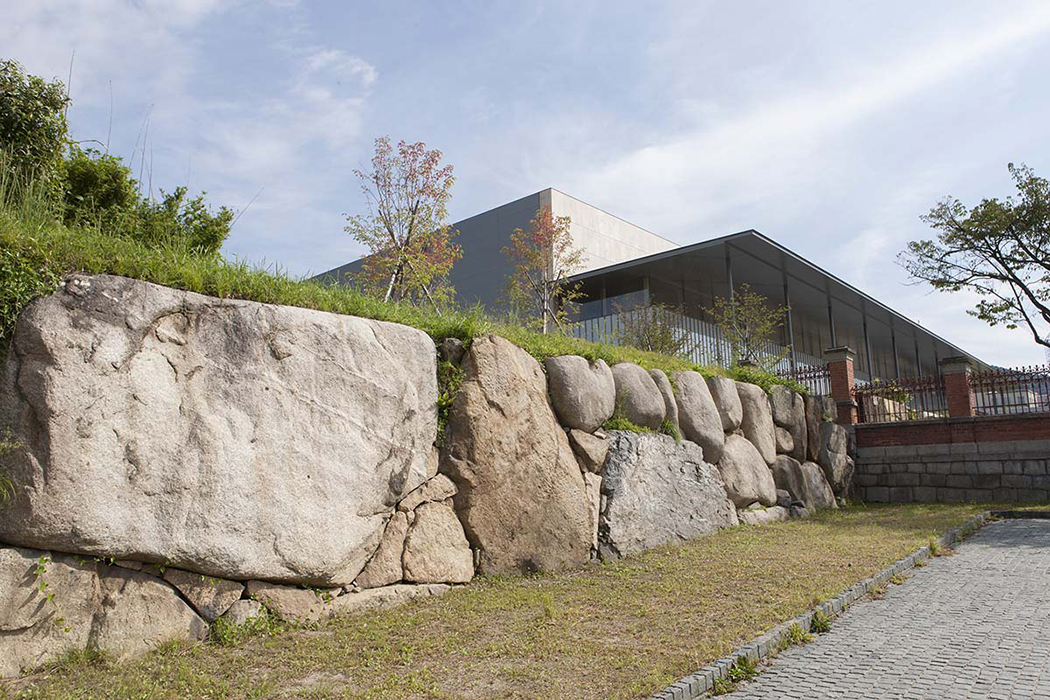 The warlord Toyotomi Hideyoshi (1536-1598) built this stonewall for Hōkō-ji Temple on the grounds where the Kyoto National Museum now stands. Constructed in Tensho 16 (1588), this stone structure once had a tile-roofed mud wall standing upon it. When Hideyoshi's son Hideyori (1593-1615) later rebuilt the temple, the tile-roofed mud wall was replaced with a covered corridor. The traces of this former wall's pillar bases can still be seen in the southwest corner. 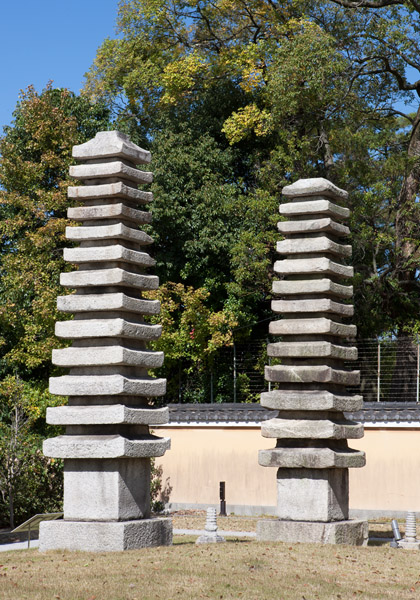 These two stone pagodas were originally located approximately 500 meters northeast of this location in Uma-machi. They stood atop a mound and are believed to have marked the graves of the brothers Satō Tsugunobu and Satō Tadanobu, two vassals of the famous warrior Minamoto no Yoshitsune (1159-1189). As shown in Illustrated Guide to Famous Places in Kyoto (Miyako meisho zue) a popular publication from the Edo period (1615-1868), the northern and southern pagodas were composed of five and three stories, respectively. The stones on the upper stories, which are believed to have fallen during an earthquake, were left as retaining walls for the mound.
The thirteen-story pagodas were restored to their current forms during repairs in 1940. At that time, small Buddhist sculptures and miniature pagodas were found interred inside a cavity in the first story of each pagoda.
Because the finial rings were later replacements, they were removed when the pagodas were relocated.
The stone used for the pagodas is granite. The south pagoda has an inscription reading "Second month of 1295 (Einin 2), sponsored by Hōsai." There is no inscription on the north pagoda. Further details regarding the circumstances surrounding their construction are not known. 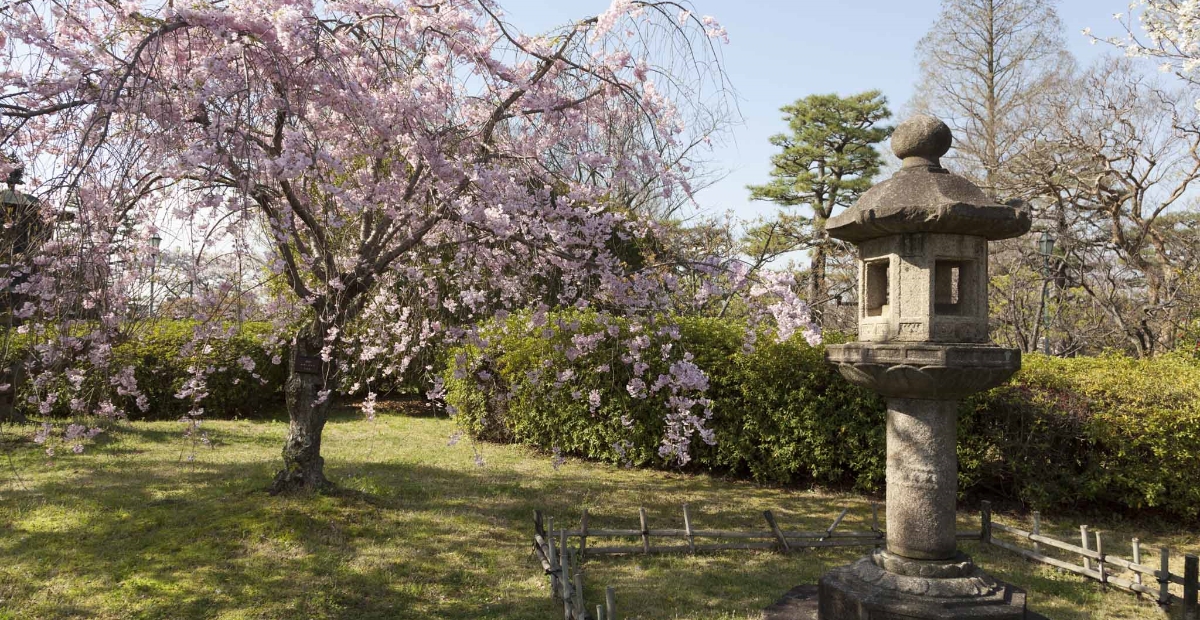 Early stone buddhas, foundation stones, and bridge posts can be found in the West Garden, located in the southwest corner of museum grounds. View this outdoor exhibit, while taking a short walk or break. 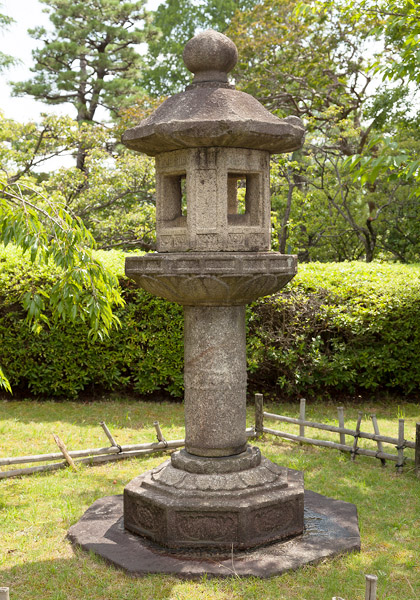 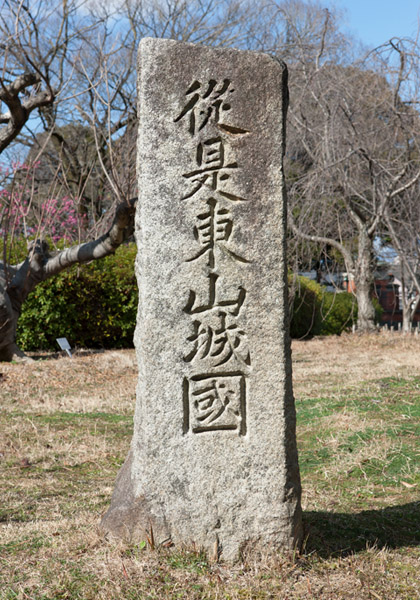 This stone marker stood at Oinosaka Pass (today in Nishigyō Ward), the western entrance to the early capital of Kyoto. The inscription reads "East of here, Yamashiro province," suggesting that it once directed travelers heading from Kameyama (present-day Kameoka City) in Tamba province to the capital. 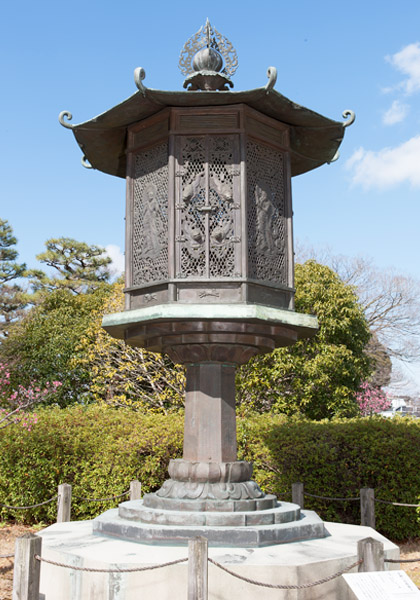 This is a full-scale replica of the gilt copper octagonal lantern (a National Treasure) installed in front of the Great Buddha Hall of Tōdai-ji Temple in Nara. Like the original, it was fabricated using copper containing arsenic and other impurities. The original is thought to have been built on the occasion of the Eye-Opening Ceremony of the Great Buddha in 752. The bodhisattvas playing music on the openwork panels and the lions (shishi) on the doors are masterpieces of Tenpyō period (729-749) casting. 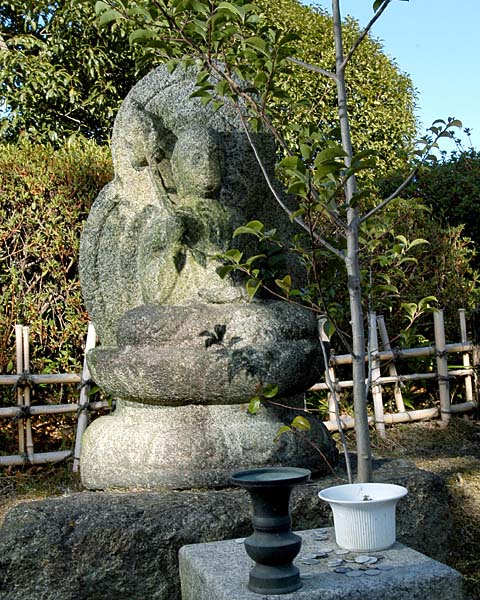 The bodhisattva Jizō is responsible for wandering the realms of this world and leading beings to salvation until the coming of the future Buddha Miroku (Skt: Maitreya) 5.67 billion years in the future. For this reason, he wears the robes and the shaved head of an actual Buddhist monk.
This statue is thought to date to the thirteenth century, its naturalistic facial expression and the undulating patterns of its robes reflecting characteristics of sculpture from the Kamakura period (1186-1333). The unusual popularity of stone sculpture at this time may have been related to the influence of Chinese stone masons who came to Japan to assist in the reconstruction of Tōdai-ji Temple in Nara, which had burned down in 1180. 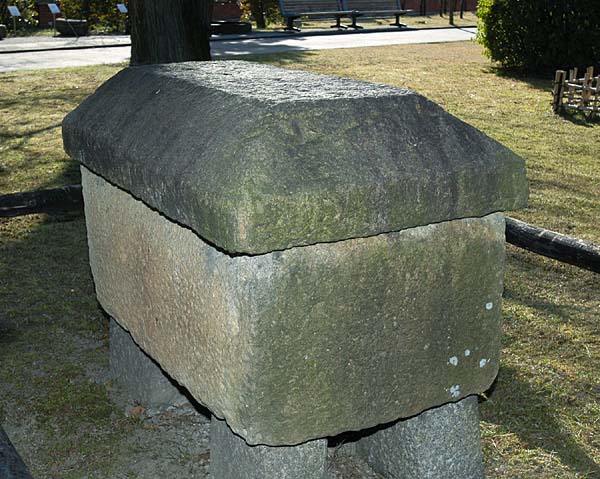 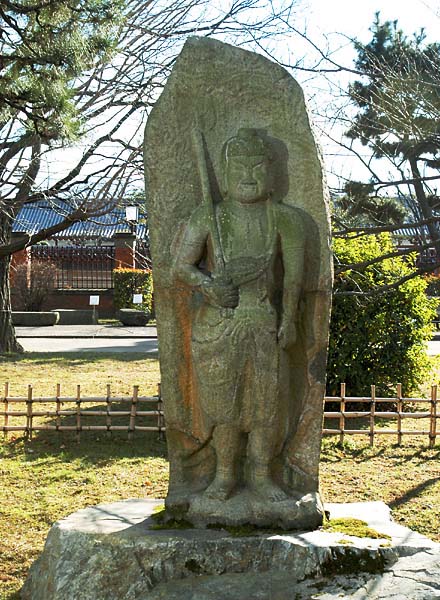 Myōō (Skt: vidyārāja) are a class of fierce and powerful deities in esoteric Buddhism that are usually depicted in wrathful forms. Their ferocity is believed to save beings who cannot be guided along the Buddhist path by compassion and mercy alone. Fudō Myōō stands out as the central figure among these deities. As the messanger of the cosmic buddha Dainichi Nyorai (Skt: Mahāvairocana), he serves as a protector of esoteric practitioners. He is usually shown holding a lasso in his left hand, a sword in his right hand, and with a halo of flames. This stone image shows traces of classical style, but the somewhat unnatural execution of its stiff bodily form suggest that it was made during the Muromachi period (1392-1573). 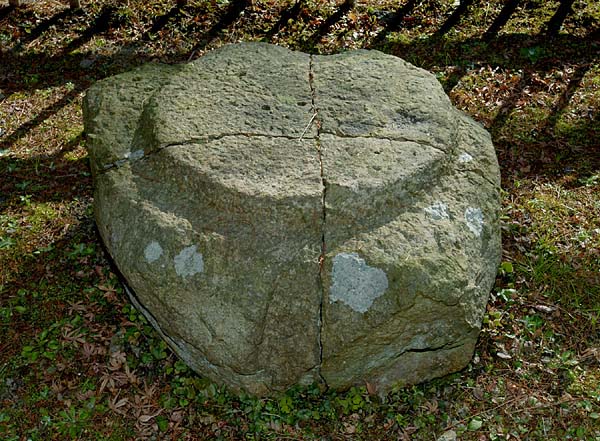 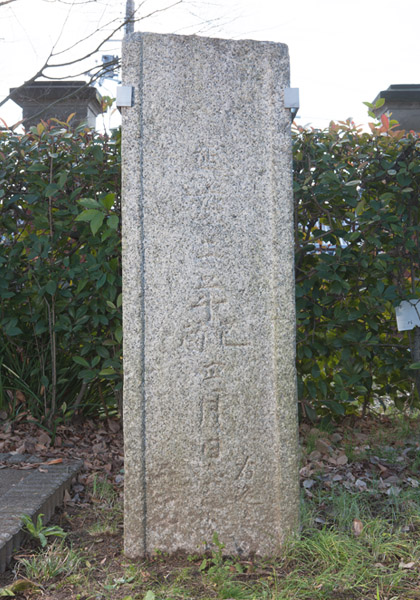 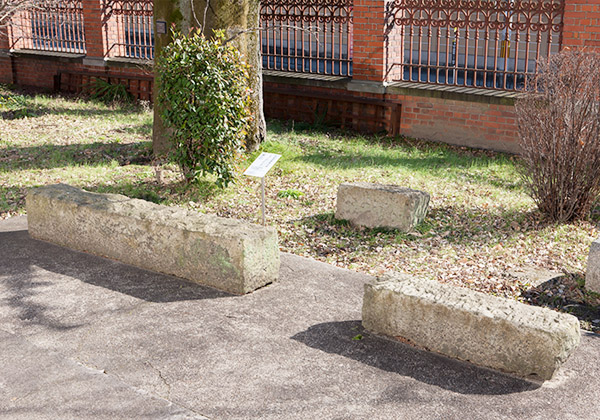 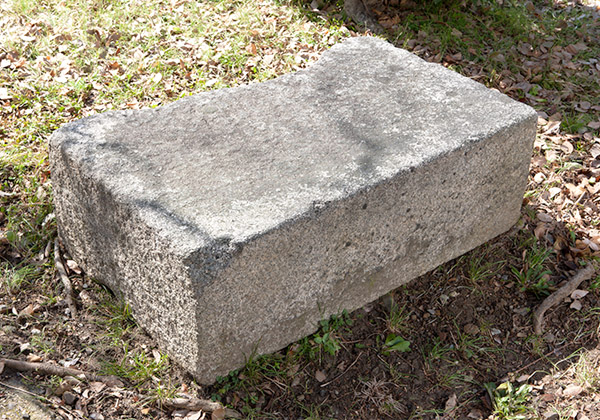 Paving Stone
From the Buddha Hall of Hōkō-ji Temple, Kyoto 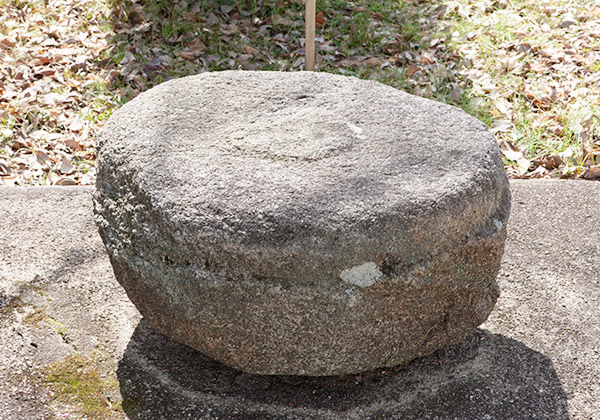 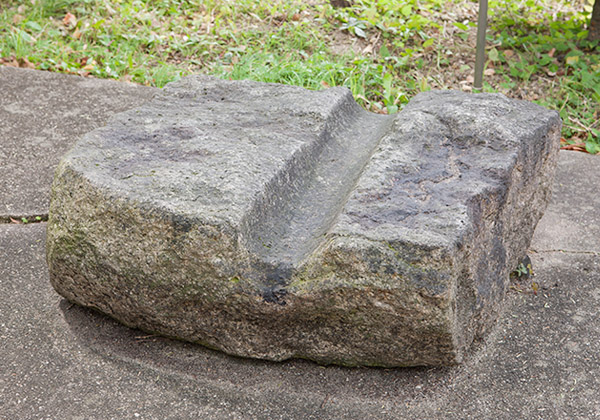 Wheeltread Stone from the Tōkaidō Highway

During the Edo period (1615-1868), stone tracks (J: kuruma ishi, literally "cart stones," also known as waishi, "wheel stones") were laid out in pairs and served as rails for ox- and horse-drawn carriages. In Kyoto, these stones with a concave cut were placed along major roads such as those leading to the Tōkaidō and Takeda Highways. 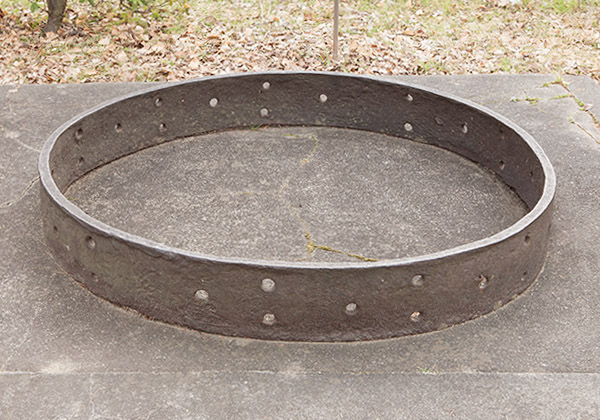 The Great Buddha Hall of Hōkō-ji Temple, built by the warlord Toyotomi Hideyoshi (1536-1598), collapsed and burned down several times due to earthquakes and fires. It was rebuilt each time, but was finally destroyed by lightning in 1798.
This iron ring is believed to have served as building material for the hall's reconstruction in the Edo period (1615-1868). Metal rings such as this supported large wooden pillars for colossal architectural structures like the former Great Buddha Hall. 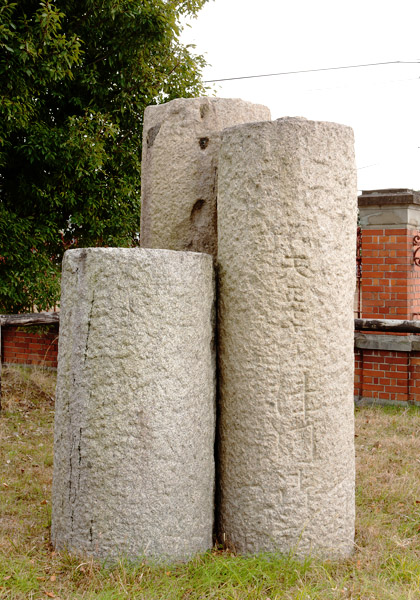 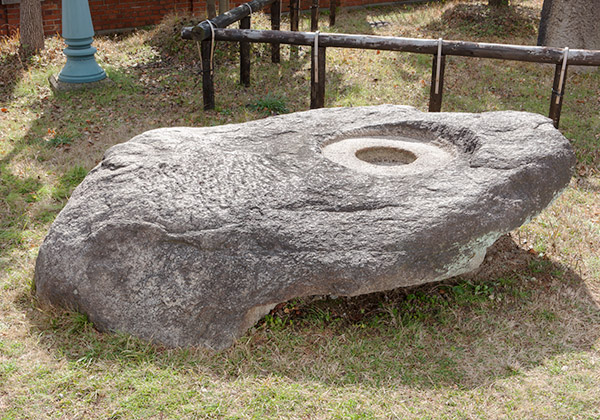 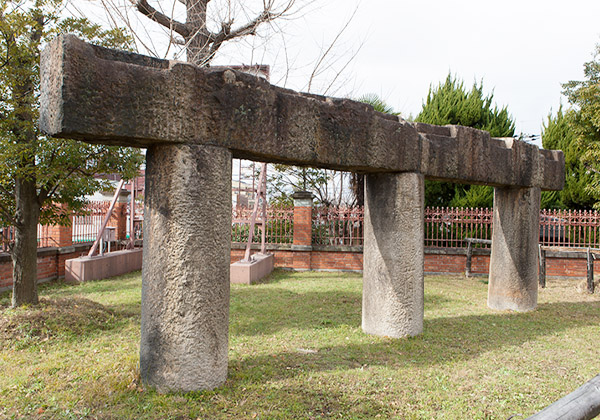 These bridge piers and girders supported the bridge built by the warlord Toyotomi Hideyoshi (1536-1598) in 1589 across the Kamo River on Gojō avenue. The four characters engraved on the surface reading "Tsu no kuni Mikage" indicate that the materials were transported all the way from Mikage (present-day city of Kobe) in Settsu province. 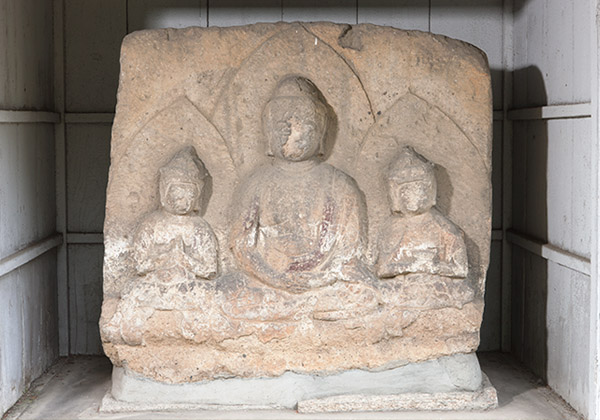 This stone triad was discovered near Takeda-chō in Fushimi in southeastern Kyoto. The central figure is Amida Buddha. The figure on the right, holding a lotus pedestal, is the bodhisattva Kannon (Avalokiteśvara). The figure on the left, whith both hands pressed together, is the bodhisattva Seishi (Mahasthamaprapta). Based on Pure Land beliefs that were popular in the twelfth century, this triad represents the scene of Amida coming to welcome and lead the dead to rebirth in paradise. Stone sculpture is comparatively rare in Japan, and there are few surviving examples. A work like this, which dates back to the Heian period (794-1185), is especially precious. 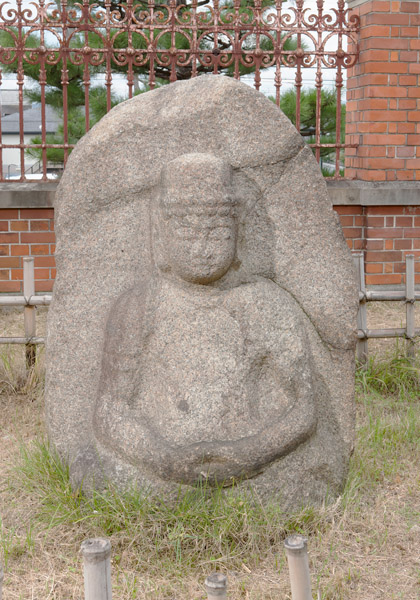 As enlightened beings, buddhas are not typically portrayed wearing the worldly adornments of jewelry or other ornaments. The cosmic buddha Dainichi, however, is believed to have transcended ordinary buddhas and is therefore depicted with a crown and jewelry. This sculptural example portrays Danichi of the Womb Realm, one of two important mandalas in esoteric Buddhism. He is shown with legs crossed and hands forming a meditation mudra in front of his belly. In contrast, Dainichi of the Diamond Realm forms a mudra with fists joined in front of his chest.
The temple Gyōgan-ji was founded in the early eleventh century by the Tendai monk Gyōen. Gyōen was known as the "leather monk" (kawa hijiri) because he wore a robe of buckskin. The temple also came to be known as Kōdō, meaning "leather temple." 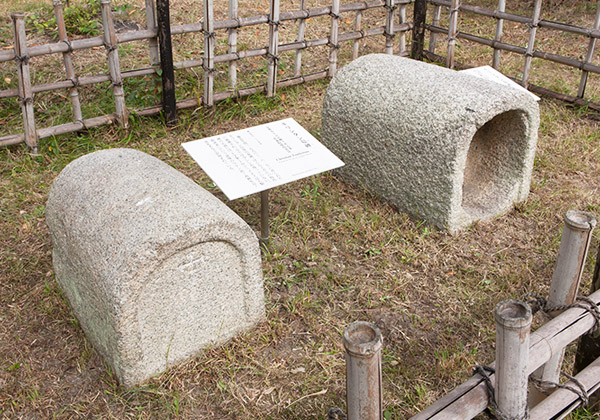 These tombstones were made for Japanese Christians in the Keichō era (1596-1615). Most of these grave markers were destroyed in the Edo period (1615-1868), during the persecution of Christians by the Tokugawa government. Carved on the front of the stones are a cross, the letters IHS (a contraction of the Latin for "Jesus the Savior of Mankind"), the Western year of death, and the baptismal name of the deceased. 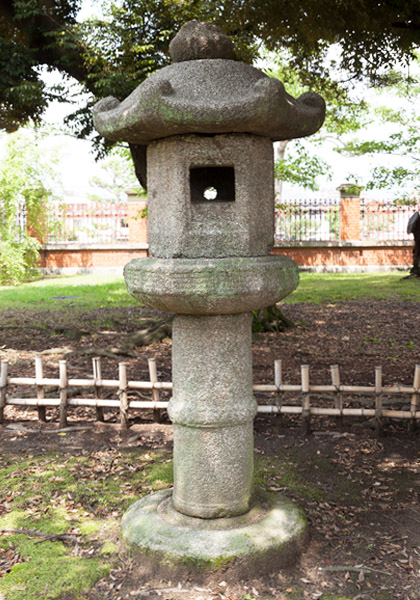 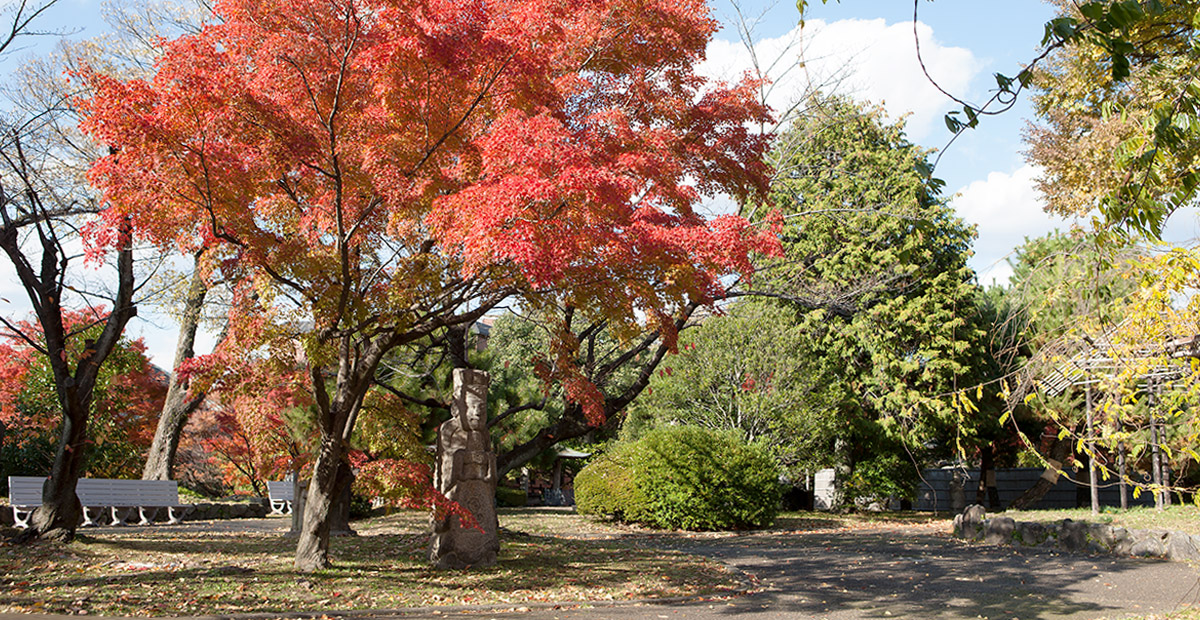 The East Garden is located on a sloping hilltop in the southeastern corner of the museum grounds. It is a garden of stone sculptures from the Korean Peninsula. After a visit to the exhibition halls, enjoy a peaceful stroll through this little hidden oasis. 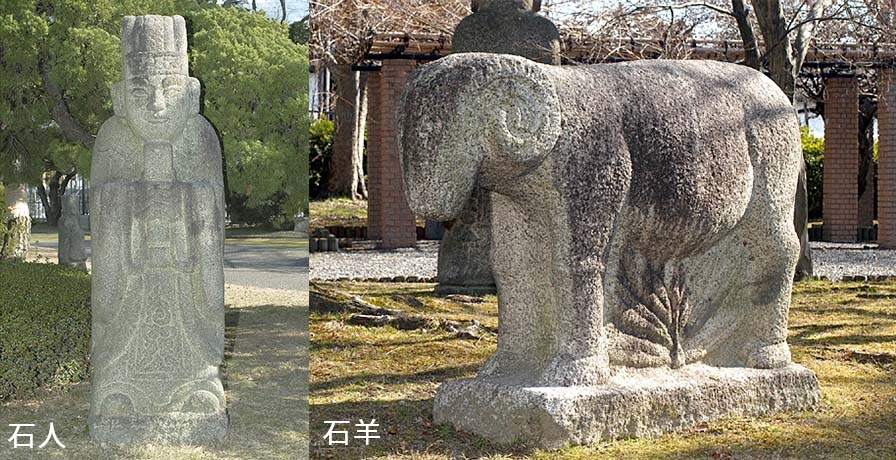 From ancient times, the tombs of powerful figures were adorned with stone figurines on the Korean Peninsula and China. These sculptures were made in Korea during the Joseon dynasty (1392-1897). 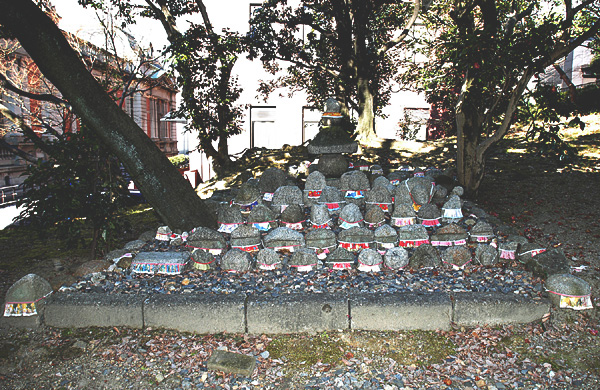 These votive stone objects were unearthed behind the stonewall of Hōkō-ji Temple.