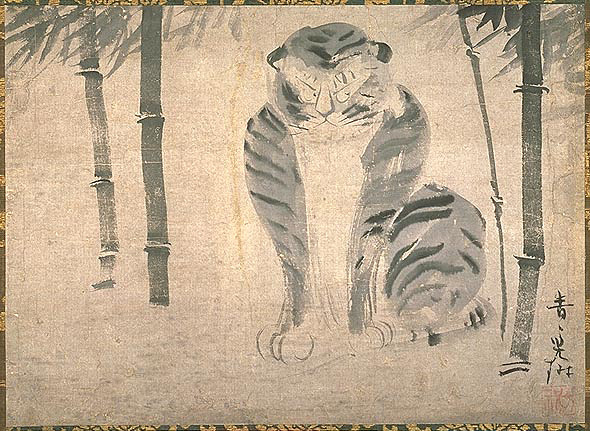 The flowers-and-birds paintings and flowering plants paintings of Ogata Korin often display a standard or formal approach, but there also exist many examples of his work that show his humorous friendliness. Two examples are Yuima-zu (Vimalakirti) and this work.

A tiger sits cozily in front of a bamboo grove, glancing off to one side, like a mischievous boy. Kano Sanraku used similar motifs in his work Dragon and Tiger, but unlike Sanraku's Chinese-influenced confrontation between two strong powers, Korin's tiger is almost comical.

This style has been called giga, or "cartoon style." If this were one of a pair, the counterpart dragon would certainly have been depicted with the same cute and humorous touch. The ability to paint this type of cartoon-like scene shows the freedom-of-thought of Ogata Korin.