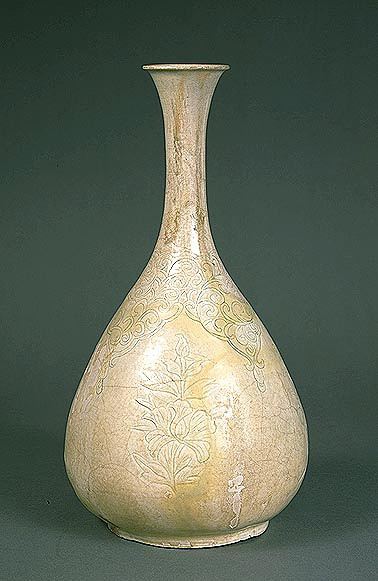 This is one of the few extant masterpieces of white porcelain from Korea's Koryo Dynasty. The vase is made of the Kaoling clay used for white porcelain It has arabesque patterns around its shoulder as if it was wearing a necklace. Carved patterns of lotus flowers and peony branches alternately decorate the four sides of the body. The transparent glaze has a tint of greenish-brown.

This vase is sometimes called "Puan white porcelain" because fragments of the same kind of porcelain have been excavated from an old kiln-site in Yucheonri, Puan-gun county in Chollapuk-do Province. This type of white porcelain glaze does not bond easily to clay, so the glaze chips easily off the clay surface. Some parts of the glazed surface have already chipped off, whereas others have creased and sunk.

The shape and the design of this vase are in the original Korean Koryo Dynasty style. The same design has been used for metallic and celadon wares. Similar vases with slight differences in shape, design, and arrangement are kept in the Korean National Museum in Seoul and the Osaka City Museum of Oriental Ceramics.