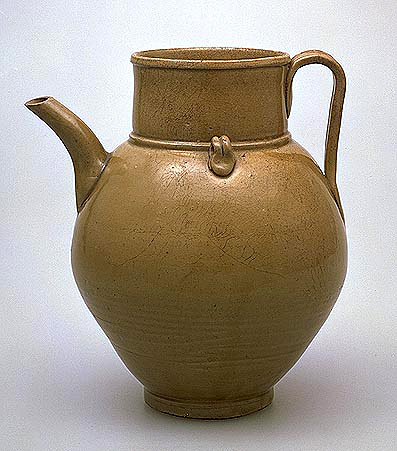 This ewer was excavated by chance from a tea plantation on the southwest slope of Mt. Okura in Kowata, Uji. It was in this area that Fujiwara Michinaga established a family temple called Jomyo-ji in 1005. This ewer may be part of the remains of this temple or its surroundings, or it might have been buried with somebody in the Fujiwara family. It was excavated in perfect condition.
The style and quality of this celadon ewer suggest that it was made at the Yuezhou pottery in Zheijang, China, between the Five Dynasties and the Northern Song Dynasty.
The work features a large body, a round neck, a precisely-formed spout and a leaf-shaped handle. An ornament decorates the shoulder on each side. The mild, withered-leaf color of the glaze was produced by an oxidized flame particular to Yuezhou ware. Some similar ceramics are preserved in the Palace Museum (Kukung) in Beijing.