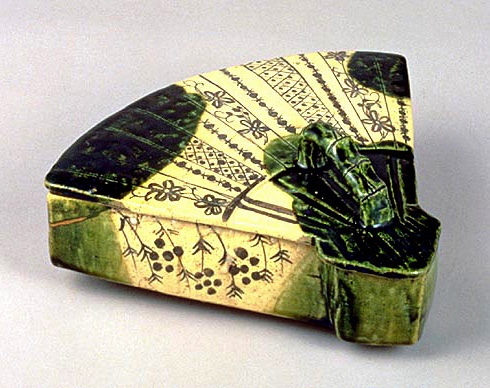 Oribe ware and Shino ware are representative porcelains of the Momoyama Period. While excellent pieces of Shino ware were produced during the Tensho and the Bunroku Eras (late 16th Century), Oribe ware was produced mainly in the Keicho and Genna Eras (early 17th Century).

This fan-shaped container is a typical example of Oribe ware. A bamboo scraper was used to carve the fan-paper and fan-sticks design into the surface of the lid. A dynamic bamboo-like handle is attached to the center of the fan-sticks. Carved fan-stick designs also decorate the body of this container. Three sides of the lid and two sides of the body are coated with green glaze, characteristic of Oribe ware. On the white part of the surface, patterns of paving stones, stripes, nets, plum-arabesque patterns, and beads are depicted in sabi-e style (rust-colored lacquer painting). The underside is unglazed in one section and has three attarched feet.

This piece was actually used at the table in the Momoyama Period and clearly reflects the tastes of day.