This topic may seem a bit difficult, but try to follow as best you can. It's about a certain type of Buddhist statue. Actually this type of statue does not appear alone, but as a set of three: in the center is a Buddha called Amida, and on either side sits an Bodhisattva-attendant, one named Seishi and one named Kannon. This set is called an Amida Raigo Triad.

We will talk about what raigo means later, but before we begin, take a look at this Amida Raigo Triad from a temple called Joshoko-ji, in the mountains north of Kyoto. 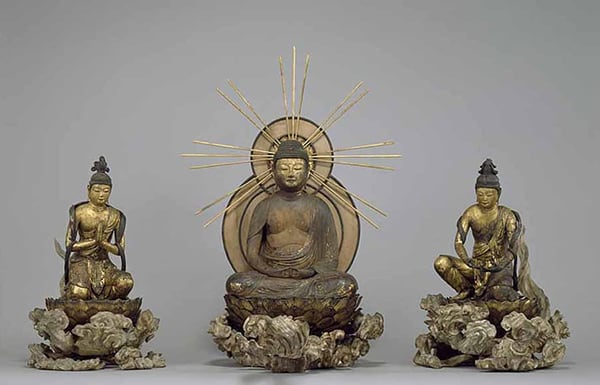 Have you ever thought about the differences between expressing something through painting and sculpture? Think about the special characteristics of each medium. For example, if you want to show a person running or walking, which medium would better depict this motion? You might be able to make either a painting or a sculpture look quite realistic, but the effect would inevitably be different because it is generally much easier to express how fast your subject is moving through painting than through sculpture. This may be due to the fact that painting can easily include, not only the subject, but also the surrounding environment! Think of this example: if you wanted to create an image of Japan's Bullet Train (or Shinkansen), you could paint a scene of a train speeding by with a rush of wind, or you could show the scenery speeding by around the train. Using perspective drawing, you could create a sense of distance. Such a scene, however, would be extremely difficult to express through sculpture.

Let's think about an example in art of a more recent period. Both the French Impressionist painter Degas and sculptor Rodin used dancers as the subject of their works. While Degas' paintings emphasize the graceful carriage and the exuberant atmosphere of the times, however, the sculptor Rodin seems most interested in the forms and poses of the dancers.

Now that we have thought a little about the special characteristics of painting and sculpture, let us move on to our main topic, Buddhist sculpture.

Buddhas are considered, like God, to be an Absolute existence and thus require no surrounding environment. Though Buddhas themselves need no enhancement, however, their followers, such as Buddhist angels or Bodhisattvas, sometimes are enriched with depictions of movement or surrounding atmosphere. Here too, however, we see the limitations of sculpture in depicting movement. On ancient Buddhist wall paintings, angels appear to be floating lightly through the heavens around the Buddha. But when these same kinds of angels were incorporated in sculpture and attached to the Buddha's halo, however, they lost their lightness and seemed to become more rigid. This is probably because of the innate differences between painting and sculpture.

The above may be one of the reasons that Japanese sculptors did not often try to incorporate surrounding environment into their sculptures. In the Heian Period, however, belief in the Pure Land spread, and people began to believe that after death they would be reborn in the Pure Land Paradise of Amida Buddha. As this belief spread, so too grew the desire to see expressions of the Pure Land in Buddhist sculpture. The result were images depicting Amida Buddha coming down from the far-off Pure Land Paradise to meet the souls of the dead and take them back with him to heaven. These images are called raigo, and usually had Amida in the center with an attendant on either side. This is the Amida Raigo Triad!

Scenes of this Amida Raigo Triad riding clouds, crossing mountains, and flying through the wind were easy to express through the medium of painting, but many difficulties arose when trying to express such scenes through sculpture, such as in the triad above. Why? Well, think about the nature of sculpture: it is impossible (or it was in those days) to create a sculpture that floats in mid-air. It is also difficult to express speed. To compensate, the sculptors of the Joshoko-ji triad tried to give the attendants a sense of tension and presence by depicting them leaning forward.

Towards the end of the Heian Period, perhaps reflecting changes in the society as a whole, artistic expression became more realistic, both in painting and sculpture. One area in which this can be seen is in the Raigo sculptures. The triad above from Joshoko-ji Temple is one of the earliest experiments in realism in a Raigo triad. Let's compare it with a painting of the same period. 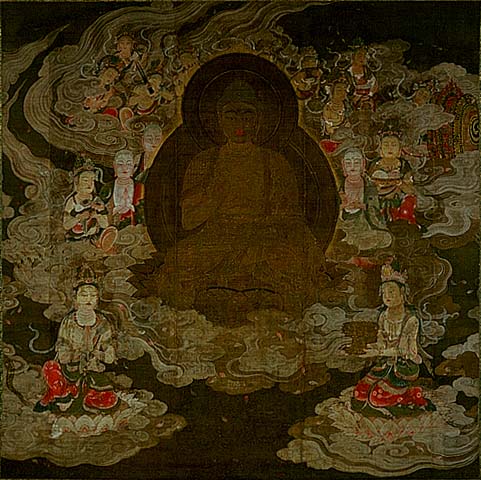 What are the differences in the way this Bodhisattva-attendant is portrayed in painting and in sculpture? In the painting, the central triad and their surrounding Bodhisattva ride upon clouds, and cross mountains rich with autumn color as they gradually make their descent. On the other hand, though the sculpture does not show the autumn mountains over which the triad is crossing, it does show all three figures on clouds, and the two attendants crouched on their knees are leaning forward, giving them the same sense of speed and presence within an environment that we see in the painting. 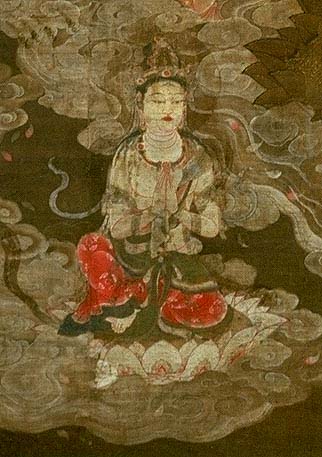 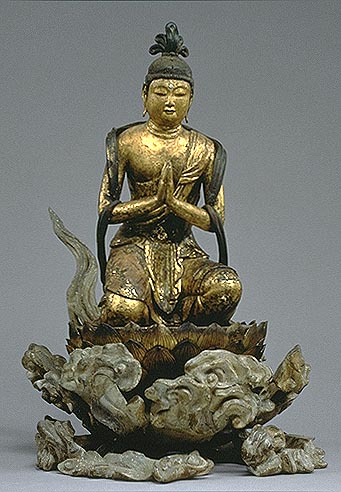 In other words, what we see here are experimental sculptures that are attempting to show the same kind of realistic expression as in painting. Such artistic experiments were being carried out over 900 years ago!