Near the water foundation in the garden of the Kyoto National Museum is a large bronze statue of the French sculptor Rodin's (1840-1917) Thinker. It may not seem suitable for a museum specializing primarily in early and premodern Japanese and Chinese art, but if you keep looking at it, it begins to appear as the symbol of our museum. It also matches very well with the red brick building of our Special Exhibition hall. 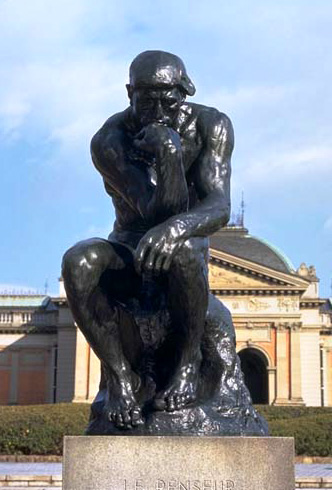 For those of you who have visited the museum a number of times, you may have noticed something different about this sculpture. Perhaps some of you may have noticed that the Thinker was not in his regular spot between December 1997 and the beginning of February 1998. The sculpture was actually being restored during this time. The copper rust that began to form on the surface of the Thinker was removed in order to restore it to its former color, and measures were taken to prevent it from falling in case of an earthquake. With these steps, the museum was finally able to return the work closer to Rodin's original vision of it and take preventative measures against possible future disasters.

In the front garden of the National Museum of Western Art in Tokyo stands Rodin's Gates of Hell. Towards the top of this magnificent work is a miniature Thinker. The Kyoto National Museum's Thinker is based on this miniaturized version, which became a separate, single work. The description of hell from Dante's (1265-1321) Divine Comedy-in which a judge decides who goes to hell-was the inspiration for the Gates of Hell. Though the Thinker looks the same, he is altogether a completely different entity. He is a lone man, seated contemplatively on a rock. It is not uncommon in all areas of art for an artist to take a part of an earlier work and give new meaning to it as a completely separate piece. The Thinker, freed from the realms of hell, no longer contemplates on the souls of hell, but is now left to think whatever the viewer imagines.

But I think that the Thinker is only striking a pose, which makes him look like he is thinking. What Rodin really wanted to create was a powerful, complex physical expression of a muscular figure leaning over his right hand, which supports his upper body, and his left hand resting on his knee. In this respect, rather than being part of a larger work, the sculpture takes on a life of its own as a dynamic tour de force.

Try to find the front of this image. Or the angle at which to best view him. I think it is probably rather difficult because there are many angles from which this statue can be viewed. Instead of being prescribed a certain angle, the viewer is made to find this angle and compelled to really look at this image. This itself is the starting point of modern sculpture. Take a look at the impressive, muscular back of The Thinker. Don't you think it has a sense of eloquence? 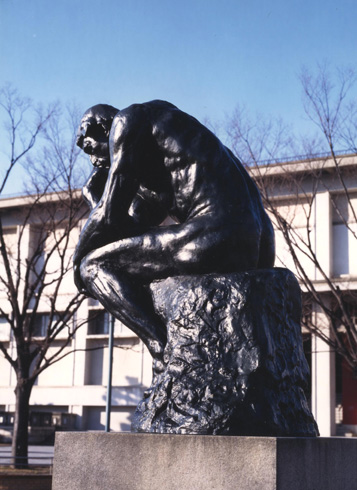