King Enma and his Attendants

Have you seen the movie The Invalid, directed by Juzo Itami? It is the story of a man dying of cancer. This theme is used to show the bewilderment with which our modern society deals with death.

Why is death so frightening? Maybe it's because we don't really know what will come afterwards. Will it be a great, unlimited darkness? This is where religions play a role. Religions are important to us because they tell us what will happen after death. Buddhism says that through reincarnation, the deceased are reborn into another world. After a person dies, however, he or she first must appear before Enma, king of the underworld, who judges the person as good or bad and decides into which afterworld he or she will be sent. The worst world to go to is the Buddhist hells.

This idea of reincarnation originally came from India. Before entering Japan, however, Buddhism passed through China, where it became mixed with native Chinese religious beliefs. The Chinese believed that there were many kings who administered the afterlife, including one named Taizanfukun. When this belief was combined with the Indian beliefs, a whole new system called "Ten Kings Worship" was created. In this new Chinese Buddhism, ten kings, including Enma and Taizanfukun, were chosen to rule the afterlife. The dead person would have to be judged ten times before going on to the next world!
Enma was believed to be the most important of these kings, so his statue would always be placed in the center, with Taizanfukun and another king called Godo Tenrin-o on either side. In front of these three kings sat two officials: a judgment-reader (shimyo and a record-taker (shiroku).

Look at the photo below. 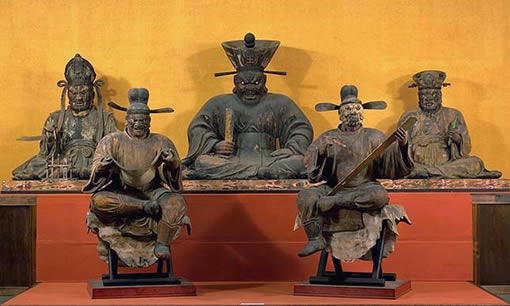 These are the sculptures of King Enma and his attending kings and officials. These statues are originally from a temple called Enmado, but they are now owned by a temple in Kyoto called Hoshaku-ji in Oyamazaki-cho, Kyoto Prefecture. They are the oldest statues of their kind and date to the beginning of the Kamakura period, in the 13th century. Look more carefully at the eyes on these statues. 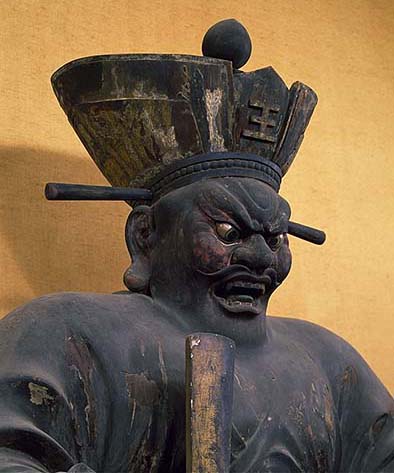 The eyes glitter because they are made of quartz. Inlaid quartz eyes are a unique characteristic of sculptures from the Kamakura period.

Now, pretend you are the spirit of someone who has just died. You are standing in a hall awaiting judgment from these kings and officials. You hear an angry voice coming from the judge's bench. As you look up to the bench, you see the menacing eyes of the judge glistening in the lamplight. Suddenly you remember all the bad things you have ever done in your life, and you are filled with shame and despair! This is the effect these statues are meant to have!

When you look at enormous statues of godlike figures in a dark hall, you might for an instant have the illusion that they are real. These are the same feelings that people have experienced throughout time. If you are able to experience these feelings, you have taken your first step in understanding history!

Every year in July, the Japanese celebrate Obon, the Festival of the Dead. Some places celebrate it in August in accordance with the old lunar calendar. A similar festival called Jizobon is also in August. Regardless of when they are conducted, these festivals are a time for the Japanese to contact and make offerings to the spirits of their ancestors every year in hopes that they won't suffer in the afterlife. In the same way, people in the Kamakura period made prayers to King Enma and his attendants that they would not be thrown into Buddhist hell, and so that the spirits of their ancestors wouldn't suffer in their lives after death.