Have you ever seen a Buddhist painting? Such paintings often have representations of various Buddhist deities, some riding on the backs of birds or on the heads of lions, some with fiery halos behind them, and others with multiple arms.

Actually, there are many different kinds of Buddhist paintings all over the world. Here we will talk about some of the mystical deities worshipped by the Esoteric sects (Japanese, mikkyo) of Buddhism in Japan. Some of the deities worshipped in Esoteric Buddhism are the myoo or "Radiant Wisdom Kings," who have fierce, angry-looking expressions. Here is one of them: 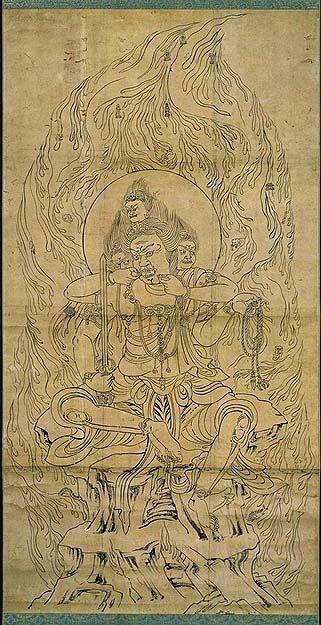 A myoo's job is to remind people to follow the proper Buddhist path in life. You and I tend to be pretty lazy if we are not reminded, don't we? Myoo are purposely given frightening faces in order to warn us to be good.

Most of the myoo worshipped in Japan originally came from India, where Buddhism started. Japanese Buddhism has many sects, but the Esoteric sects are especially interested in mystical chants and ceremonies. Esoteric Buddhism began in India and was transmitted to China before finally bring brought over across the sea to Japan. The man who is credited for bringing Esoteric Buddhism to Japan was a priest named Kukai. 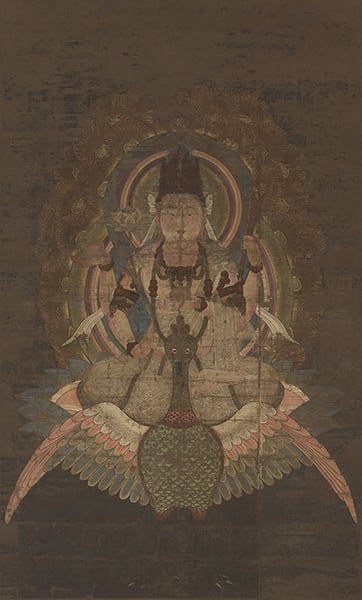 Can you see that the deity is riding on the back of a peacock? Though it may not look like it, this deity is also a myoo. Though all the other myoo have scary faces, this myoo alone has a kind face. This is actually a female myoo, a Radiant Wisdom Queen, known as the Peacock Myoo. Why do you think she rides on a peacock? For the answer to this question, lets go back to ancient India.

You probably know that India has many kinds of poisonous snakes, such as the cobra, who can harm or even kill people if they bite. For this reason, most people are scared of poisonous snakes. This was true in ancient India and is still true today. One way to protect yourself from poisonous snakes is to train them to obey you with a flute, like the snake trainers in India. However, another way to protect yourself is to worship creatures that can get rid of snakes. The peacock is one such bird. According to ancient Indian legend, when a peacock comes face-to-face with a snake, it purposely pretends to be scared and lets the snake wrap itself around its body. Then just as the snake is about to attack, it spreads out its wings and feathers with great force and sends the snake flying!

The image of the elegant peacock driving off a poisonous snake, like a beautiful woman driving off an evil beast, made a big impression on people. In time, they began to think that this bird had godlike powers, and the peacock's image crystallized into that of to that of a Buddhist deity. This is the Peacock Myoo.

The peacock is facing forward. Its face is a little amusing, don't you think? In the background are golden feathers that look like fish scales. These are meant to represent the peacock's tail feathers spread out behind him.

The myoo sitting on the peacock's back has four arms. The reason for this is that deities with more arms were considered to have more mystical powers. In her hands, she holds a lotus flower, a peacock feather, a fruit that looks like a lemon, called a bija-puraka, and a pomegranate-like fruit. Each of these objects has some kind of spiritual significance. The lotus flower in one of the right hands represents the deity's benevolence and kindness. The bija-puraka in the other right hand is a special fruit that cures the sickness of anyone who eats it. One of the left hands holds a pomegranate-like fruit thought to drive off evil spirits. The other left hand holds a peacock feather, with the power to prevent disasters. These objects represent the mystical capabilities of the Peacock Myoo.

Esoteric Buddhist paintings are painted in vivid colors. The artists tried to express respect for the Buddhas and their magical powers by carefully painting them with dignified accessories and decorations. The clothing on this Peacock Myoo was painted with luxurious materials. For example, the folds in the cloth are painted in real gold, and the pattern on the cloth is painted in real silver. The silver paint has tarnished to a blackish color over time, but when it was first painted, the whole painting glittered with gold and silver!

This painting was made in the 13th century, during Japan's Kamakura period (1185-133). This painting could be used to pray for many things: the prevention of natural disasters or fires, rain, a bountiful rice harvest, the successful delivery of a new baby--for anything, really.

These days there are many natural disasters such as volcanoes and earthquakes. In the old days, we probably would have tried to prevent such disasters by worshipping this Peacock Myoo.