April is the season for flower-viewing in Asia. The Japanese favor cherry blossoms, but for centuries the Chinese have loved plum blossoms, peach blossoms and peonies. Of all of these, the flowers that perhaps best signify the arrival of spring are the peach blossoms.

Look at the following painting: 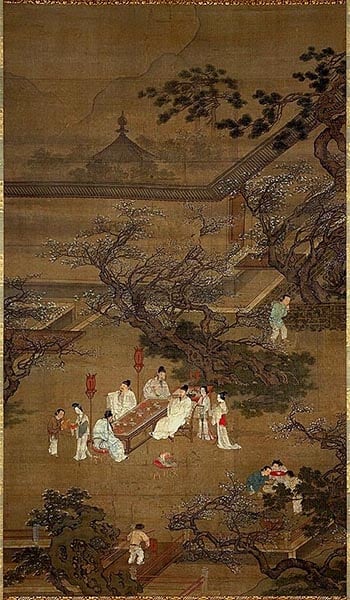 This painting is called Peach and Plum Blossom Garden. It depicts Li Bo (701-762), a famous Chinese poet of the Tang Dynasty (618-907 A.D.) spending an evening with his cousins in a garden of peach and plum trees in full bloom. This is the scene that Li Bo described in a poem entitled "Prologue on a Spring Evening Spent with Cousins in a Peach Blossom Garden." The poem is included in a collection called True Treasures of Classical Literature. For the collection, the title was changed to "Prologue on an Evening in a Peach and Plum Blossom Garden" and this is the name best-known today.

In the central garden, several large, slightly tilting peach and plum trees are in full bloom. Can you figure out which are peach and which are plum? Look carefully; the peach trees have longer, thinner leaves. The plum trees have shorter, wider leaves with blossoms in clumps. 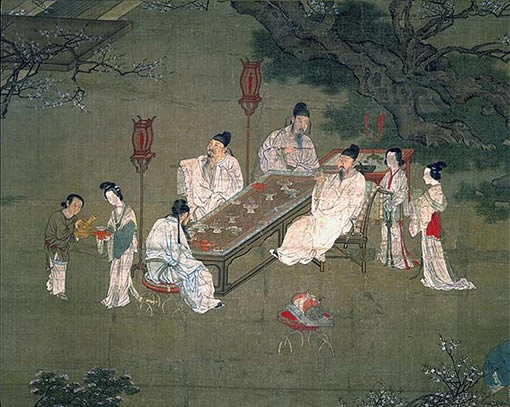 Under the trees, a table has been set with platters of round cakes and cups of rice wine. Four men with rather similar-looking faces are sitting aroung the table. These are Li Bo and his cousins. Li Bo is thought to be the man on the right. He and the man with his back to us are drinking wine. Another man is stroking his long beard and looking up at the blossoms. I wonder what he is thinking about? The man in the rear of the picture is holding a brush in his right hand. He seems to be about to write something on a piece of paper laid out on the desk next to him. Actually, these four men are not sitting in the garden only to drink and admire the blossoms. They are taking turns writing poems about the event. If one doesn't come up with a good poem, he has to pay by drinking more wine!

The other people in the picture are busy filling empty cups and bringing in fresh pitchers of wine. Candle-holders around the table are lit with candles and one of the servers is carrying a lantern. The party seems to be in full swing. Night has just set in and the light of the moon probably clearly outlines the pale blossoms against the night sky.

In China, the peach and plum trees are thought to be brothers. In this painting, the close relationship is symbolized by the two trees leaning against each other with branches intertwined. The trees seem to be a metaphor for Li Bo and his cousins.

This painting is only one of a set of two. The other painting, which always hangs next to it, is called the "Golden Valley Garden." These were painted, not in the Tang Dynasty, when Li Po lived, but much later in the first half of the 16th Century, during the Ming Dynasty (1368-1644 A.D.), by a famous painter named Qiu Ying. Somehow, these two scrolls were brought to Japan. Since the Edo period (1600-1868 A.D.) they have been carefully cared for by Chion-in Temple in Kyoto.