About the Fusuma Paintings from Obai-in Temple

Have you ever been in a traditional, Japanese house? If so, then you probably know that many of the rooms are divided by sliding door panels called fusuma. In the old days, large houses or temples often had rooms with no fixed walls that were surrounded by sliding fusuma on all four sides! These days, most fusuma are quite plain, but in the past these panels would often have been covered with paintings.

Many different scenes, such as landscapes, human figures, birds and flowers, or animals could be painted on fusuma. Sometimes every room would have a different scene on the fusuma. For example, if you were in one room, you might be surrounded by cheerful scenes of birds and flowers, but if you stepped into the next room, you would suddenly be in the midst of a wide landscape of snowy mountains! Fusuma paintings were used in this way to give each room a completely different atmosphere.

These days people rarely have any more than a few pictures on their walls. In ancient Japan, however, paintings were often incorporated into the architecture of a whole room or a whole building. That was an elegant way to live, don't you think?

There are not many of these fusuma left today. Unlike screens or scroll paintings, which can be folded or rolled up in a hurry, fusuma are large and cumbersome. When buildings caught on fire, the fusuma and their paintings usually burned in the blaze. Another problem was that, although scroll paintings and screens were usually brought out only for short periods of time and then put back away, fusuma were generally left up throughout the year. Fusuma are made of thicker and more durable paper than screens or scrolls, but because they were regularly exposed to sunlight, sharp changes in temperature and humidity, and the wear-and-tear of daily life, most of them ended up faded, dirty, and torn.

When we understand such difficulties, it seems almost miraculous that some sliding-door panels have survived from as far back as the Muromachi and Momoyama periods, four or five-hundred years ago! Such fusuma exist only because they have been treated with special care over the centuries.

Now let's look more closely at some of the fusuma that have survived the test of time. These fusuma are owned by Obai-in, a sub-temple of Daitoku-ji, one of the large Zen temples in Kyoto. They were painted in the Momoyama period (1568-1615 A.D.) by an artist named Unkoku Togan (1547-1618 A.D.). Togan was originally a retainer (servant) of the Mori family, who ruled a large belt of land in Western Japan. In 1593 (Bunroku 2), however, his Lord, Mori Terumoto, honored him by giving him a temple called Unkoku-an. This was the same temple in which the famous Japanese artist Sesshu (1420ca. 1506 A.D.) had previously lived.

Have you ever heard of Sesshu? He was one of the greatest Japanese painters. There is a famous story about Sesshu and a "mouse made of tears." When he was a little boy, Sesshu was sent to a temple to become a Buddhist monk. However instead of doing his chores and practices, he spent all his time drawing and painting pictures. One day, the abbot of the temple decided that he had had enough of the boys nonsense, and he tied Sesshu to a post for a whole day in punishment. At the end of the day, the abbot went back to let Sesshu go. As he walked closer, however, he suddenly saw a mouse spring out from under the boy's feet! Looking more closely, however, he realized that what he had seen was not a real mouse but a mouse that Sesshu had drawn on the floor using his big toe! Instead of ink, the boy had used the tears of shame that he had shed over the long day. At that moment, the abbot of the temple realized the boy's greatness and from then on he allowed Sesshu to paint to his heart's content.

Sesshu died at the beginning of the 16th century, so Togan never actually met the artist. By moving into the temple that the great Sesshu had lived in, however, he became the successor to the master--the person to carry on his artistic lineage. Togan took his artistic-family name "Unkoku" from the name of Sesshu's temple, "Unkoku-an."

In the temple Obai-in in Kyoto, there are a total of forty-four fusuma panels by Togan! Can you imagine how hard he must have worked to paint them? The paintings are truly spectacular. What do you think of this one? 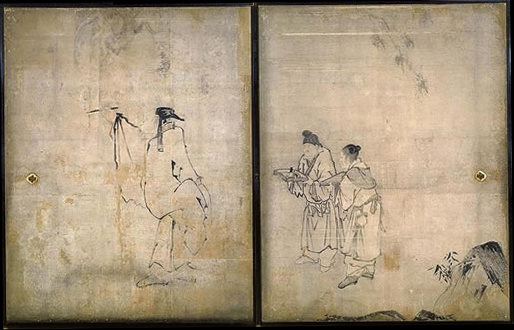 The almost life-size figures on this panel have a powerful effect on the viewer. By contrast, this next fusuma painting gives the viewer a sense of calm, peaceful tranquillity. 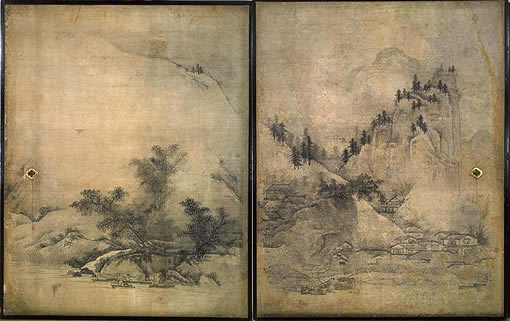 This is a gentle landscape of a quiet village. If you allow yourself to become absorbed in the scene, you can't help but relax and forget your problems!

All of the fusuma panels above are masterpieces in their own right, worthy of the successor of Sesshu. As I said before, people in the old days liked to have fusuma paintings on all four walls of a room. Unfortunately you cannot get this effect from a computer screen, but if you ever have the chance to visit a Zen temple in Japan, the Kyoto National Museum, or another museum with fusuma paintings, try sitting in the middle of the room and let yourself become lost in the artwork. You might find yourself in a whole new world!