About the Main Exhibition Hall of the Kyoto National Museum

Soon after the Meiji Restoration (1864-1871), the Japanese government, created a National Museum in Tokyo, including divisions of Natural Sciences, Botanical Gardens and Zoological Gardens, with the aim to promote domestic industry. Several years later, in 1887, the art museum facility was separated from other divisions and moved under the authority of the Imperial Household Agency. The new Imperial Museum functioned to promote the appreciation of paintings, sculptures and other fine and applied arts from Japan's many temples and shrines.

In 1889, a one-time Committee for the Investigation of National Treasures was created under the direction of the Imperial Museum Director, Ryuichi Kuki, and Chairman of the Board of Directors, Tenshin Okakura. In the public interest of preservation and exhibition, this committee carried out a large-scale survey of the historical and artistic merits of over two-hundred-thousand works of art from shrines and temples across Japan. The committee decided to build two new Imperial Museums in the culturally rich, former capitals of Nara and Kyoto.

Construction on the new Imperial Museum of Kyoto began in June 1892 and was completed three years later in October 1895. The original buildings consisted of the Main Exhibition Hall, still used today for Special Exhibitions, the red brick Main Gate (West Gate), and the iron and brick Museum Fence, which extends from the Main Gate around the side of the museum on Shichijo Street. The buildings were designed by Dr. Tokuma Katayama, architect for the Imperial Household Agency, and built by architects and carpenters from the Imperial Household Agency, as well as stone masons, bricklayers, roof layers, plasterers, metal smiths and other artisans from Tokyo, Kyoto and western Japan. This information is inscribed in the plaque from the roof-raising ceremony.

Tokuma Katayama was one of the pioneers of European architecture in Japan. As a student, he studied under Josiah Conder, a British Professor of Architecture at the National University of Engineering, and then, as Condor's assistant, was involved in the construction of the Imperial Villa at Arisugawa. During that time, he also toured Europe studying the architecture of the European courts. 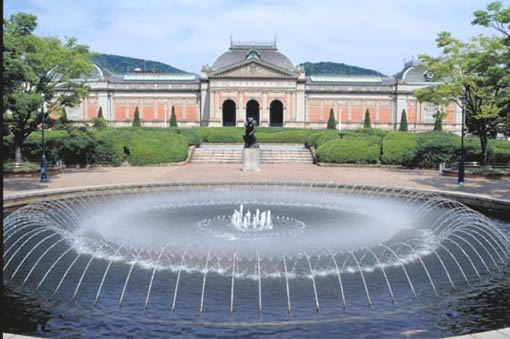 The Kyoto National Museum combines the lavish Baroque architecture of the Louvre Palace in France with a lyrical, delicate, Japanese sensitivity and form that blends with the natural backdrop of Kyoto's Higashiyama (East Mountains). The museum grounds gently slope to the west. The photo above is a view from the Main Gate on the west side of the museum facing the Main Exhibition Hall. Note how the shape of the hills rising above each of the two wings is reflected in the rounded, central section of the roof. The Higashiyama hills, the eastern sky and the many trees and hedges in the museum gardens all change colors with the seasons. These seasonal changes are reflected in the soft colors of the slate roof and stonework and in the predominately horizontal, clean architectural lines. 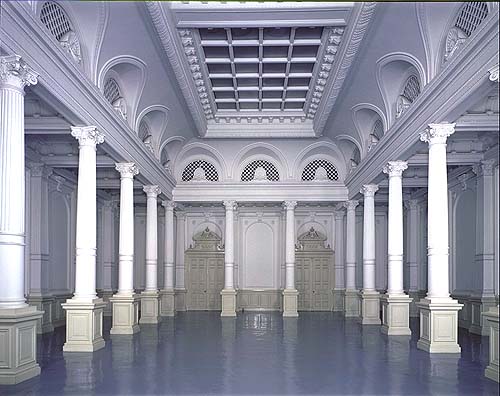 Inside the Main Exhibition Hall, the white, plaster walls reach up to a remarkably high ceiling. The simple and restrained, baroque designs over each doorway give the interior an air of tasteful simplicity. The use of glass in the ceiling of the central hall as a way to increase light is considered a landmark in Japanese architecture. 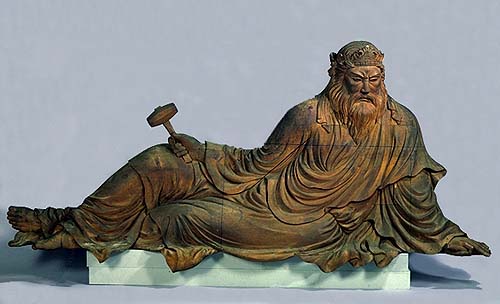 Above the front entrance, relief statues of two Buddhist gods of the arts, Visvakarman (Bishukatsuma) (in the photo) and Mahesvara (Gikeiten), decorate the triangular gable above the portico. The wooden archetypes for these statues were made by Hisaichi Takeuchi, who became a sculptor after being impressed by the Buddhist sculpture in Nara. In 1888 (Meiji 22), he was appointed as a professor in the Sculpture Department of the newly founded Tokyo School of Art by Principal Tenshin Okakura. His other works include replicas of the Kamakura-period Yuima Koji (Vimalakirti) sculpture in Nara's Kofuku-ji Temple.

The museum name was eventually changed to the Kyoto National Museum, but the historic architecture from the original Imperial Museum of Kyoto has been designated as a Important Cultural Property.