If you stand in front of the brick Main Exhibition Hall of the Kyoto National Museum, facing west, you should be able to see two mountains in the background.

To the left is the mountain upon which Kiyomizu Temple is built, and to the right is Mount Amidagamine, upon which is Hideyoshi's grave. Between the two mountains is a valley. On the left (north) side of this valley is an area called Toribeno, which has been a place for funerals since ancient times. In the Middle Ages, Toribeno was the location of an enormous cemetery extending from the valley down to an area presently called Umamachi. Umamachi is the area directly northeast of the Kyoto National Museum, one traffic light north of the museum on Higashiyama Street. Slightly east of the Umamachi intersection are a series of small hills upon which originally stood the two stone pagodas below. Today they are in the garden of the Kyoto National Museum. 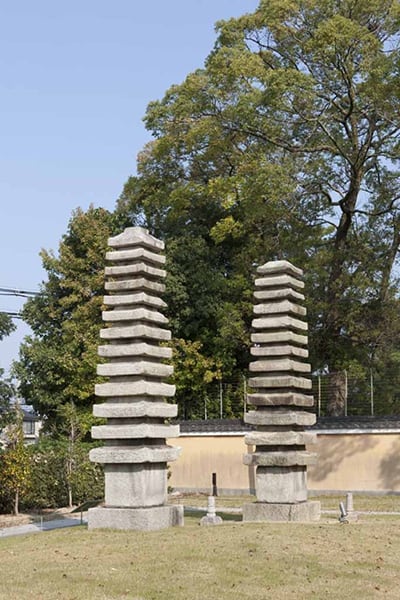 These pagodas is six meters in height, but each layer of the pagoda is a separate block of stone. These layers are simply stacked on top of one another; in the entire six-meters, there are no supports or central poles holding the blocks together! On top of the foundation stone sits a base pillar. On top of that are stacked thirteen stories of roofs, each layer a separate block. On top of the uppermost roof is a spire, or "finial." It took the highest level of technical skill to create the perfectly flat surfaces of each layer. The very hard and heavy granite stone from which they are built helps keep each layer in place, but without perfect balence, the pagoda would fall down like a stack of blocks!

The foundation stone of the east side of the pagoda closest to the museum (the one in front in the photo below) is carved with the name of the priest named Hosai, who organized the building of these pagodas. In the base pillar of each pagodas was carved a hole within which were placed various offerings, such as tiny Buddhas and relic-holding miniature pagodas, shown in the photo below: 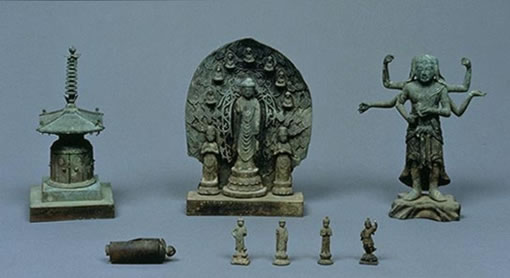 The people who made these pagodas must have made each block very carefully, with their prayers bound into each block. However, the relics inside were not made for purely devotional purposes, but were the products of a handicraft industry. Thus they were not valued for their artistic merits or originality as much as for such factors as technical precision, materials and size. According to such factors, they would be given a price and put up for sale.

These relics and the money to build the pagodas themselves were given as donations. But why would anyone want to donate things to place inside a pagoda? And what was the purpose of building pagodas outside such a large cemetery? What role did Hosai play in the construction? We don't know the answer to all these questions, but we may be better able to guess after we know more about the construction of another similar set of stone pagodas.

South of Kyoto, in the ancient capital of Nara, is a temple called Hanya-ji. In a central location within this temple stands a pair of stone pagodas that are twelve meters in height, twice the size of the Umamachi pagodas! These pagodas were built an artisan named Yi Xingmo, who came to Japan from Sung Dynasty China to help rebuild the Great Buddha Hall. They were completed before the Main Temple Hall by and took many years to build! It took so long, in fact, to build these pagodas that the abbot (head priest) of Hanya-ji died before they were even finished! According late abbot's wishes, however, the new abbot carried out the project to completion. The new abbot then began planning a new Main Temple Hall. The person who helped him organize this construction was a priest named Eison.

Under the supervision of Eison the long term construction of the Main Hall became a project of not only religious significance, but also of social significance! Why? Well, behind the temple of Hanya-ji extended a large cemetery to the south. Living in and around this cemetery were lots of poor, often homeless people called the "untouchables," who dug graves and helped at the funeral services. On the north side of the temple was a facility for people suffering from the incurable disease of leprosy (Hansen's Disease). What Eison did was to begin employing these people to help with the construction of the temple, in exchange for which he gave them money or food. By employing the labor of these people, Eison had begun a kind of social welfare system!

The religious activities that Eison was involved in can be divided into two groups, missionary work and social work. Missionary work was involved telling people to follow a virtuous path in life. The target of his activities was the newly formed middle class of wealthy farmers, such as village headsmen and other officials. From his religious teachings, Eison was able to gain the confidence of the wealthy middle class. In return, these people would then try to gain religious virtue by donating land or money to be used collectively to build temples or pagodas. In order to insure their individual virtue, the wealthy farmers would also give offertory relics (such as those in the photo above) to be placed inside the completed pagodas.

Eison, however, did not use this money only to pay for materials and professional artisans. Instead he used it to benefit society at large by feeding it back into the hands of the needy. Sometimes he would act as a charity, by giving money directly to the "untouchables" or people with leprosy, but often he would use the money to create a kind of social program by giving needy people work building temples, pagodas or statues. Thanks to Eison's efforts the temple was able to function not only as a charitable organization but also as a kind of social welfare agency. This example of the construction at Hanya-ji is a typical example of the kind of religious works going on during the Kamakura Period.

Eison's good works were carried out not only at Hanya-ji, but in other places as well. In 1284, when he was 84 years old, Eison organized the enormous construction project of repairing the Uji Bridge. When that project was finished two years later, he built a huge, fifteen-meter high stone pagoda on Ukijima Island, in the middle of the Uji River!

Eison finally died at the age of ninety, but his good works continued to be carried on by his successors. One example of this is the Umamachi pagodas. They were built five years after Eison's death by his successor, Hosai, who employed the poor people who lived around Toribeno cemetery as laborers!