A great earthquake took place on the seventh intercalary month of 1596 during the Momoyama period (1573-1615) in Japan. Hundreds of people lost their lives in the prosperous merchant city of Sakai and in the warlord Toyotomi Hideyoshi's (1536-1598) Fushimi Castle. The earthquake also hit Kyoto, destroying the main halls of Kitano Shrine and Tō-ji Temple as well as twenty-eight Kamakura-period (1185-1333) Buddhist sculptures in Sanjūsangen-do Temple. At the time of the earthquake, a wood building 60 meters (about 197 feet) high stood behind the area where The Collections Hall of the Kyoto National Museum now exists. This wooden structure was the Great Buddha Hall that Hideyoshi took ten years to build. Although records tell us that the hall was unaffected by the earthquake, the main image of the large wooden Buddha was completely destroyed just before it was completed and as a result had to be dismantled.

In hopes of recovering from the destruction, the reign name was changed to Keicho ("long-lasting happiness"). Thereafter, during the nineteen years of the Keicho era (1596-1615) and until the downfall of the Toyotomi clan, Kyoto fully recovered and many splendid objects in various areas were made. The Funaki-version screen painting, Scenes in and around the Capital (Important Cultural Property, Tokyo National Museum), which provides an aerial view of Kyoto from the south, depicts various historical events that occurred during the Keicho era. In those days, anyone would have immediately recognized paintings of the event and remembered when it took place. A multitude of energetic figures from different professions appear as if they are in a lively scene from a play. On the lower left part of the right screen are scenes of people playing in the waters of the Kamo River, with the Great Buddha Hall depicted largely and up close against the expanding Higashiyama (Eastern Mountains) area to their right. 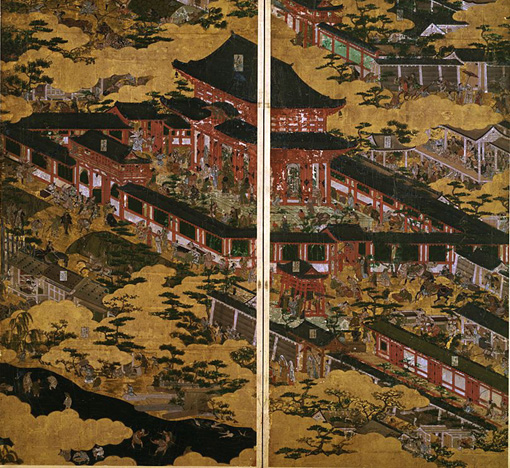 Sanjūsangen-do Temple, which exists even today, can be seen in the lower right corner of the screen. In the painting, the long temple hall runs from north to south indicating that the building was illustrated from a perspective as seen from the southwest. Do you see the archer shooting an arrow near the western terrace of the building (at the lower right corner of the screen)? On the eastern side (below the archer on the other side of the wall) is a lively teashop with grilled dumplings. Unfortunately, this tea shop no longer exists today.

Between the northern side of Sanjūsangen-do and the earthen roofed wall to the south of the Great Buddha Hall is a large bell tower. This bell tower, which was constructed in 1614, may have been situated around the area where the fountain in the museum's garden is now located. After Hideyoshi's death, in the eighth month of 1598, artisans and builders began constructing a large bronze Buddha image to replace the original wooden one that had been lost in the earthquake. However, the Great Buddha Hall that Hideyoshi built burned down in 1602 when a fire broke out during the casting of the bronze Buddha and was rebuilt in 1610. The new Buddha Hall, constructed over many years, was to be crowned with this magnificent bell tower but the warlord Tokugawa Ieyasu objected to the bell's inscription and canceled the dedication of this bell. Shortly thereafter, in 1611, the Winter Battle in Osaka between the Toyotomi and Tokugawa clans began. Perhaps the painter wanted to allude to this incident by distinctly capturing the wooden rod striking the temple bell.

Outside the roofed wall that surrounds the Buddha Hall, various attendants, such as palanquin bearers, baggage carriers, and horse caretakers, are depicted standing around the grounds. Within the temple grounds are well-dressed samurai and court ladies, as well as courtesans, Europeans, casually dressed artisans, and peasants in travel wear. The figures gather in twos and threes around and near the opened doors inside the Buddha Hall. The figures appear to be looking up towards the back of the high roof. In their line of view is the back side of a complex layer of eaves and building materials, indicating that there may have been much interest in the newest architectural techniques of the day. Outside the temple, a group of people sit around tiered food containers, drinking sake, as if they have finished their sightseeing; however, no one is seen worshipping the bronze image of the Great Buddha.

Today, an iron ring that was used for a pillar of the Great Buddha Hall, an architectural wonder which amazed people four hundred years ago, can be found in our museum's West Garden, right across the street from Sanjusangen-do Temple. Such iron rings, called kanawa in Japanese, made it possible to bind together several wooden poles to create great pillars. This technique was also used one hundred years later in 1709 for the reconstruction of the Great Buddha Hall of Tōdai-ji Temple in Nara, which can be seen even today. 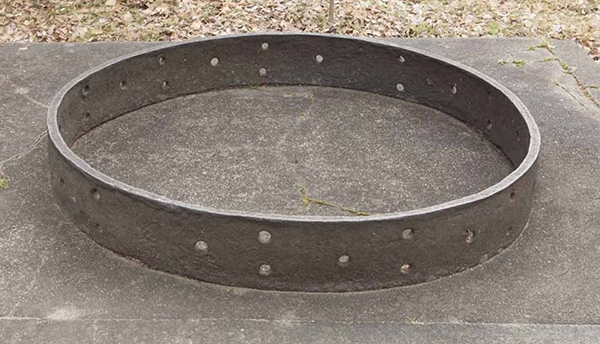