What is a One Million Pagoda?

Have you ever seen a wooden stupa called the One Million Pagoda? Though these pagodas are less than a foot tall, we say in Japanese that they are "built of wood" instead of "made of wood." This is because pagodas are usually large buildings.

What makes these pagodas so interesting? Part of the appeal comes from the reason they were given the name "One Million Pagodas." You have probably seen three-story and five-story pagodas, but why one million? The answer is that long ago in the Nara period (710-794), one million of these pagodas were built! 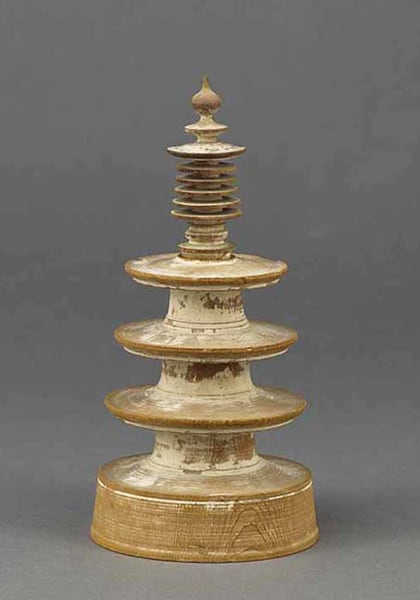 Japan's Nara period was over 1200 years ago! Back then, there were no electric machines and very limited types of tools; the craftspeople who made these pagodas must have worked very hard to make so many. Some of the pagodas were broken before they were finished, but these were fixed very neatly, using a glue made out of lacquer. When they were finished, the pagodas were coated with a layer of white chalk. This made the cracks in the wood invisible to the naked eye. But you can see the cracks very clearly if you look at x-ray photos of these pagodas.

Can you see how this One Million Pagoda has three stories? The pagoda is a little over 20 centimeters tall; the top section is a decorative spire called a "finial," which is actually removable. If you take off the finial, you will find that the body of the pagoda has been carved out inside, like a bottle. Inside the cavity, there is a rolled scroll. This scroll has part of a Buddhist sutra called a dharani written on it. (A sutra is a sacred Buddhist scripture.)

Amazingly, these small scrolls are some of the oldest printed papers in the world! Long ago, someone filled the One Million Pagodas one-by-one with rolled sutras. If there were a million pagodas, then there must have been a million sutra scrolls. It must have been tedious work!

We don't know exactly when the "building" of these pagodas began, but many of the One Million Pagodas have a year, month, and day painted on the bottom. Looking at these dates, it appears that most of the pagodas were made between 767 and 769 A.D. (during the Jingo Keiun era). In 770 (Hoki 1), awards were presented to the people who had been involved in this project. This means that all one million of the pagodas must have been made in less than five years! Researchers today are trying to figure out how so many could have been created in such a short time--it seems that the pagodas must have been made around-the-clock, almost without any rest!

The One Million Pagodas were given as offerings to ten of the largest temples of the day: Daian-ji, Gango-ji, Todai-ji, Saidai-ji, Yakushi-ji, Kofuku-ji, Horyu-ji and Kawahara-dera, all in Nara, Shitenno-ji, in Osaka, and Sufuku-ji, in Shiga. However, of all these temples, only Horyu-ji still has any of these One Million Pagodas left. Today there are about 43,000 of these pagodas in Horyu-ji.