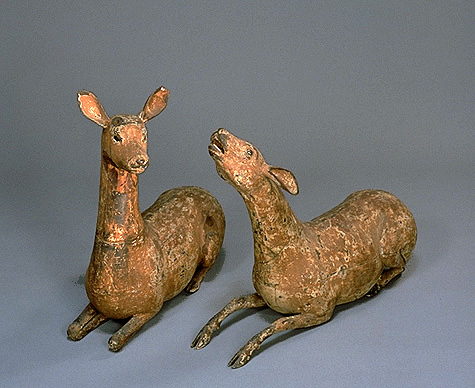 The female deer has an outstretched neck is and raised ears. Her forelegs extend in front of her as she cries out. She has a slightly rounded belly and a smooth graceful form. The male deer sits with his four legs bent, seemingly staring into the distance. He has a nimble body suggesting a high-spirited character.

These depictions reflect the sculptor's accurate observation of nature. It is assumed that the subject of these statues comes from the legend of Priest Myo'e at Kasuga Shrine. When Priest Myo'e visited Kasuga Shrine, it is said that thirty deer bent their knees and bowed to him near the Chu-mon Gate of Todai-ji Temple.

Priest Myo'e is known for having had personal experience with and love for animals. It seems natural that he would have had deer placed in a spot usually occupied by lion-dogs. It is thus likely that these deer were made during Myo'e's lifetime. Some scholars suggest that these deer may have been made by the sculptor Tankei.