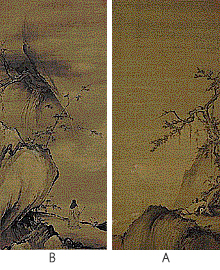 Like Summer Landscape, owned by Kuon-ji Temple in Yamanashi Prefecture, these scrolls each bear the seals of two Chinese collectors. One seal reads "Zhong Ming Zhewan (Zhong Ming's Rare Articles)," and the other reads "Lushi Jia Cang (Lu Family Property)." A third seal, "Tenzan," indicates that the paintings were once owned by Yoshimitsu, the third Shogun of the Ashikaga clan.

As all three landscape paintings bear the same set of seals and all of them are painted on the same type of silk, it is assumed that these three paintings originally belonged to a set of four scrolls of the four seasons. Of these, the "spring" scroll is now missing.

Yoshitane, the tenth Shogun of the Ashikaga clan, gave these two scrolls to a man named Ouchi, who donated them to Suden in Konchi-in Temple via Myochi-in Temple.

The limited subject matters and outstanding, diagonally-based compositions of these two scrolls enable the viewer to identify with the human figures portrayed in the scenes. Additionally, the composition allows the viewer to experience a seasonal atmosphere.

These scrolls were attributed to the Emperor Huizong after having been brought to Japan. The composition of the paintings are similar to the style of Liang Kai. Because these scrolls show characteristics that predate the styles of Ma Yuan and Liang Kai, we can conclude that these scrolls were painted in the late twelfth century.