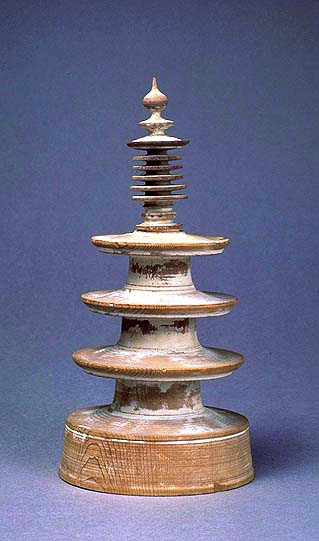 This piece is one of a set of one million pagodas ordered by Empress Shotoku in 764 A.D.. She had them made after the Rebellion of Emi-no-Oshikatsu, as an offering of peace for the nation. At the time, each of ten major temples received a share of 100,000 pagodas, though only Horyu-ji Temple still has any left today.

The bodies of the pagodas are separate from the finials (spires). Each pagoda has a carved, cylindrical cavity in the center to hold a roll of Buddhist scripture called the Daranikyo sutra (Dharani). Many of the pagodas have a production date and a craftsperson's name inscribed in ink.

This piece has ink inscriptions on its underside and on the finial, but they are covered by the chalk white gofun coating.