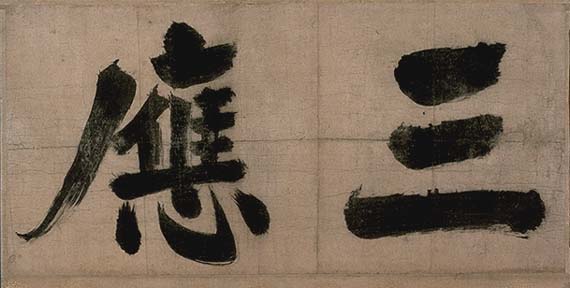 Tofuku-ji Temple, one of five major Rinzai Zen temples in Kyoto, has numerous original works of Zen calligraphy for framing or for carving in stone. This set was originally given to Shoten-ji Temple in Hakata by the priest Bujun Shiban (Butsugan Zenji, 1186-1266), the master of Abbot Enni Bennen (Shoichi Kokushi, 1202-1280), who founded Shoten-ji Temple. When Shoten-ji was attacked by Tendai sect monks, Enni took refuge in Tofuku-ji Temple, which he also founded. Since then, this set of calligraphy has been kept in Tofuku-ji.

These works are written in bold, large-sized letters. The calligraphic styles suggest that they were written not only by Bujun, but also by Zhang Jizhi, a talented calligrapher from the Southern Song Dynasty associated with the Zen sect. The brush strokes are vigorous and strong with a dignified sensibility that conveys the spirit of the calligraphers.

The work featured in table of contents says shuso (head monk), an office held by monks within Zen monasteries This particular example seems to be the hand of Zhang Jizhi.