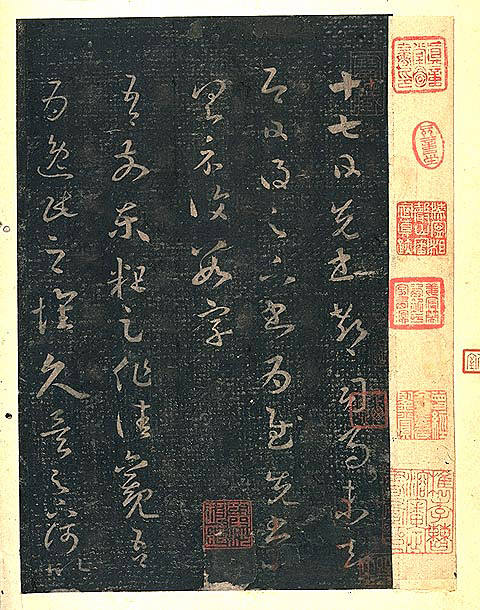 On the Seventeenth Day

This rubbing is of the most outstanding selection of Wang Xizhi's cursive script calligraphy. The work is known as the Seventeenth Album or On the Seventeenth Day from the meaning of the first characters.

The album consists primarily of letters, most of which are believed to have been addressed to Zhou Fu, a local governor in Yizhou. According to the postscript, the Tang Dynasty Emperor Tai Zong, an ardent collector of Wang Xizhi's writings, ordered tracing copies of On the Seventeenth Day to be made by calligraphers Chu Suiliang and others, in the same way that he had ordered copies of Preface to the Gathering at the Orchid Pavilion. Stone engravings were then made from the tracing copies. Chu Suiliang and calligraphers to follow used the rubbings from these engravings as calligraphy samples for their students.

From the excellent condition of its paper and its finely aged ink color, it is evident that this particular rubbing was one of the first taken off the stone engraving. It is considered the finest extant edition of On the Seventeenth Day.