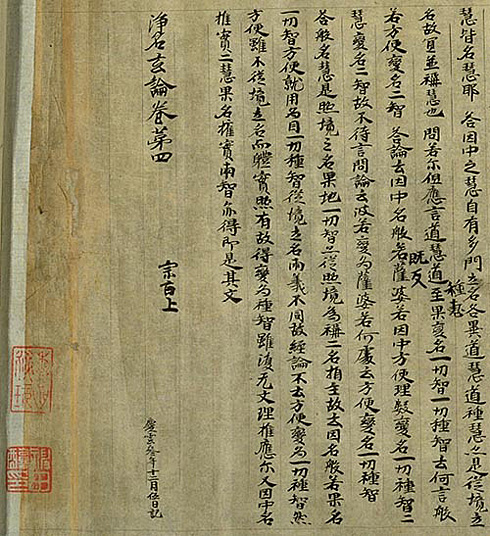 The eight-volume Jomyogen-ron is a research work on the Yuimakyo (Vimalakirti-Nirdesa) sutra. It was written by Kajo Daishi Kichizo (549-623, Priest Jizang of Jiaxiang temple), who established the Buddhist School of Three Ideologies in Sui Dynasty China.

This copy has a postscript dated December 706 and is reknown as the oldest extant copy of dated Buddhist scriptures. In actuality, however, Vol. I was supplemented in the Heian Period and Vols. II and V were supplemented in the Kamakura Period. The prefaces of volumes other than VII and VIII were also copied at later dates.

The calligraphy is in the manner of China's Six Dynasties Period, making it a valuable source for calligraphy historians. In addition, the notations on how to read Chinese into Japanese are important data for study of the Japanese language.