Advanced ticket reservations for this exhibition are not required. However, in order to alleviate congestion in the galleries, the number of people allowed into the galleries may be limited. Exhibition dates are also subject to change. Updated information will be posted on this website and on the museum's official Twitter feed, so please check the latest information before visiting the museum in person.

With the special support of

With the support of

With the special cooperation of

With the cooperation of

2021 marks the 1200th anniversary of the death of Dengyō Daishi Saichō (767–822), founder of Japan's Tendai school of Buddhism. Saichō was moved by the Lotus Sutra's egalitarian teaching that "the path to enlightenment is open for anybody," a doctrine that formed the basis of Tendai Buddhism's propagation across Japan. Saichō established Enryaku-ji Temple on Mount Hiei, an area overlooking Lake Biwa to the east and Kyoto to the west. The temple produced many eminent priests whose diverse teachings would have a major impact on Japanese culture.

On this occasion, the special exhibition Buddhist Art of the Tendai School will be held at the Tokyo National Museum, the Kyushu National Museum, and the Kyoto National Museum over three periods between October 2021 and May 2022. The exhibition traces the history of the Tendai school in Japan, from its founding at Enryaku-ji Temple to the construction of Tōeizan Kan'ei-ji Temple and the establishment of strong ties with the shogunal government during the Edo period (1603–1868). While taking advantage of the regional characteristics of each venue, the exhibition will present treasures passed down throughout Japan and cultural properties that exemplify the concept of universal salvation expressed in the Lotus Sutra. 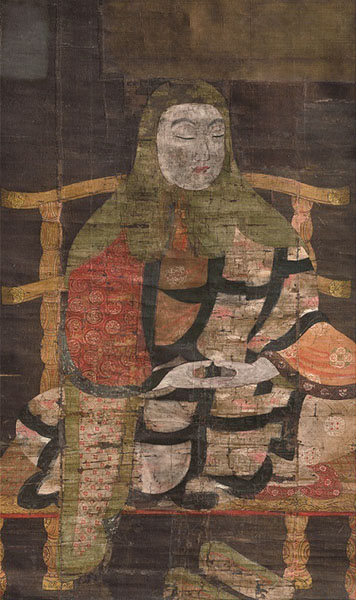 Section I. Saichō and the Beginnings of Tendai Buddhism

Tendai (C: Tiantai) Buddhism is rooted in the teachings of the Lotus Sutra and was established by a Chinese priest named Zhiyi (538–597), who lived during the Sui dynasty (581–618). Dengyō Daishi Saichō (767–822) learned of Zhiyi's teachings from sutras brought by Jianzhen (688–763), a Chinese priest who had travelled to Japan to teach the correct form of the Buddhist precepts.
Saichō subsequently founded Enryaku-ji Temple on Mount Hiei, and he also travelled to China to further his studies. Upon his return, Saichō received official permission to establish the Tendai school in Japan. The school forged its own independent path while clearly differentiating its teachings from the great temples of the former capital, Nara. This chapter features treasures closely associated with Saichō, which tell the tale of his eventful life.

Saichō was succeeded by Jikaku Daishi Ennin (794–864) and Chishō Daishi Enchin (814–891). These two priests travelled to the Chinese capital Chang'an to gain a deeper grounding in esoteric Buddhist doctrine, which Saichō had also studied in China.
They subsequently established the foundations of Tendai Esoteric Buddhism. Other notable Tendai priests include Sōō (831–918), who founded the ascetic practice of ambulating Mount Hiei's sacred sites, and Annen (b. 841). These men systematized the doctrines of Tendai Buddhism.
This chapter explores the unique path travelled by the Japanese Tendai school after the incorporation of esoteric Buddhism. 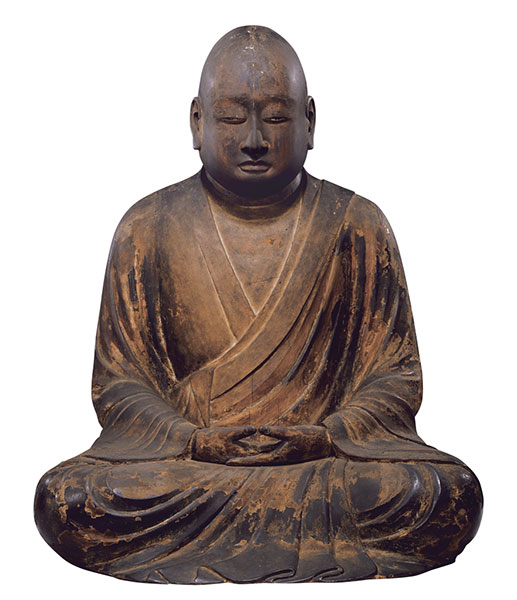 Section III. The Dissemination of Tendai Buddhism across Japan

Tendai Buddhism places great emphasis on the Lotus Sutra teaching that "the path to enlightenment is open to all." This doctrine formed the foundation for Tendai propagation across Japan. The ancient Japanese practice of worshipping kami who dwell in sacred mountains was also incorporated into Tendai Buddhism, with this unique syncretism still practiced in many parts of Japan today. This section uses treasures from around Japan to explore how Tendai Buddhism prospered throughout the country. 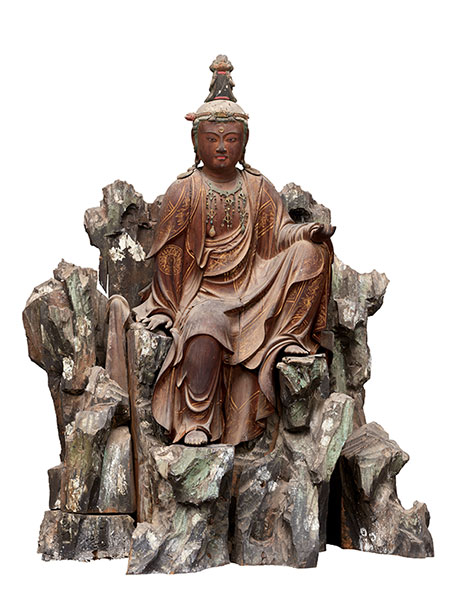 Section IV. The Nobility and the Flowering of Tendai Art

In the middle of the tenth century, the temple complex on Mount Hiei was revived by Jie Daishi Ryōgen (Ganzan Daishi, 912–985). Under Ryōgen's leadership, and with the deep devotion and economic support of the Emperor and the powerful Fujiwara clan, Tendai Buddhism reached its height of prosperity.
Ryōgen's disciple Eshin Sōzu Genshin (942–1017), however, distanced himself from worldly matters. Amid growing concerns about the onset of mappō, an age of decline in the Buddhist teachings, Genshin applied himself to writing the Ōjōyōshū (Essential Teachings for Rebirth in the Pure Land). This treatise incorporated Pure Land thought into Tendai doctrine, with the resultant Tendai Pure Land Buddhism providing succor for many with its promise of future rebirth in a Buddhist paradise.
This section features magnificent Tendai treasures associated with the religious devotion of the nobility. In doing so, it examines the major role the Tendai Pure Land thought had in shaping Japanese Buddhism.

As Buddhism increasingly permeated Japanese society, the Lotus Sutra and its doctrine of universal salvation inspired Hōnen (1133–1212), Shinran (1173–1263), Nichiren (1222–1282), and other priests to found new lineages that became collectively known as New Kamakura Buddhism. After training at Mount Hiei for over twenty years, meanwhile, Shinsei (1443–1495) laid the foundations for the Tendai Shinsei school based on Pure Land thought and the observance of Buddhist precepts.
Medieval Tendai also incorporated the worship of native Japanese kami. The theory called honji suijaku asserted that kami were local manifestations (suijaku) of buddhas that were identified as the kami's original nature (honji). The kami of Hie Sannō Shrine were worshipped as the tutelary deities of Mount Hiei and became the center of a devotional cult that developed into the Sannō Shintō tradition.
This chapter examines how the teachings of the Lotus Sutra led to the blossoming of a rich variety of Tendai beliefs and traditions during Japan's medieval period. 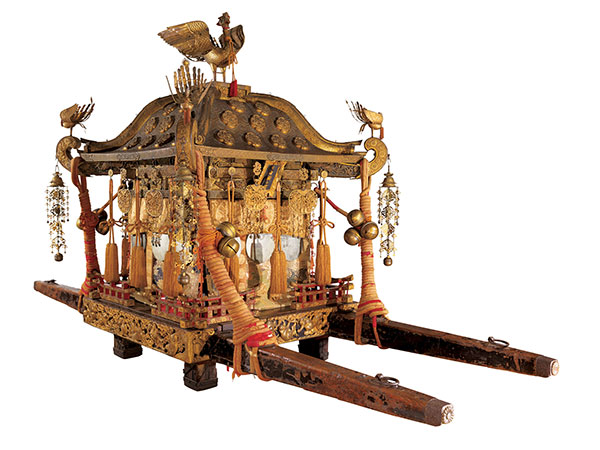 In 1571, the temple complex on Mount Hiei was razed to the ground by the warlord Oda Nobunaga (1534–1582), though it was later restored by Toyotomi Hideyoshi (1537–1598) and the Tokugawa Shogunate. Jigen Daishi Tenkai (1536–1643) played a pivotal role in this restoration. Tenkai served as a religious advisor to the first shogun Tokugawa Ieyasu (1543–1616), and he developed Tōshōgū Shrine and Rinnō-ji Temple on Mount Nikkō as memorials to Ieyasu, who was deified as Tōshō Daigongen after his death. Tenkai also established Tōeizan Kan'ei-ji Temple in Edo (present-day Tokyo) and laid the foundations for Tendai Buddhism's propagation across the Kantō region.
This chapter explores the history of Tendai Buddhism during the Edo period through the resplendent Edo Tendai treasures that blossomed under the patronage of the Tokugawa Shogunate. 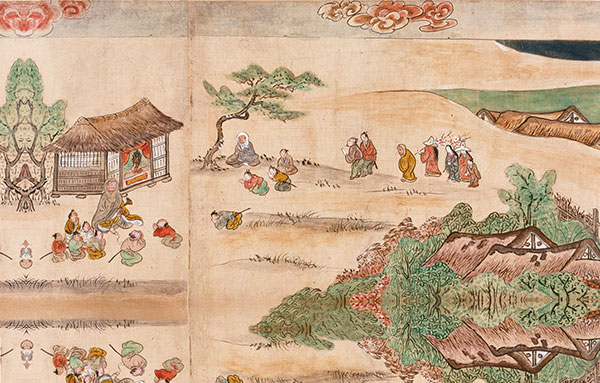