Returning Sails off a Distant Shore Attributed to Muqi: Examining a Painting of the Eight Views of the Xiao and Xiang Rivers

This painting is mounted as a very wide hanging scroll, which was originally a long handscroll that was later cut into shorter sections and reformatted into hanging scrolls.

On the back of this painting, in the lower left-hand corner, appears a stamp that reads "Doyu" This seal belonged to the third shogun of the Muromachi period (1392-1572), Ashikaga Yoshimitsu (1356-1408), who took the name Doyu in his old age, when he became a Buddhist priest. This seal tells us that this painting belonged to Yoshimitsu. Unlike an artist's stamp, seals such as this, known as the collector's seal, indicate the owner or collector of an object. 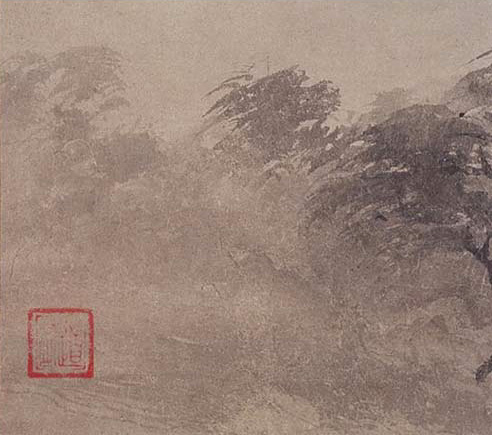 Today, there are a few similar hanging scrolls in addition to this work, such as Fishing Village at Dusk from the collection of the Nezu Institute of Fine Arts, stamped with the Doyu seal. The original handscroll that connects these works is a painting of the Eight Views of the Xiao and the Xiang, attributed to a thirteenth-century Chinese Chan (J., Zen) Buddhist priest of the Southern Song dynasty (1127-1279), named Muqi Fachang. Muqi lived in the temple Liutong-si near West Lake in the Song capital of Hangzhou and excelled at painting. He not only painted Buddhist themes such as the compassionate Guanyin (J., Kannon) and arhats (Ch., luohan; J., rakan), but also created bold ink paintings of animals, such as dragons, tigers, monkeys, cranes, and wild geese, and plants, such as pines, bamboo, and plums, and landscapes.

In Muqi's day, China and Japan had close relations, and cultural exchange was very popular. Many Japanese priests also went to study Buddhism in China, and some returned to Japan with Muqi's paintings. Later, these paintings came to represent new artistic trends from China and drew much attention from and were favored by art aficionados in Japan. The shogun Ashikaga Yoshimitsu was among these enthusiasts of Muqi's works. In China, however, critics said that Muqi's brush techniques were rather rough and did not regard his works highly, and gradually, Muqi was forgotten. In Japan, on the other hand, in part because of his masterpieces, such as Eight Views of the Xiao and the Xiang and Daitoku-ji Temple's triptych Guanyin, Monkey, and Crane, Muqi was worshipped as a great Chinese painter. His works were also given the honored name Osho-yo ("Great Priest-style"), and his technique and style served as a model for Japanese ink painting and largely influenced its formation and development.

Now, let me explain about Eight Views of the Xiao and the Xiang. This subject represents eight scenes along the area of Lake Dongting, where the Xiao and the Xiang rivers meet, in Hunan Province in China. Each scene in this series is designated by a poetic title, "Wild Geese Descending on Sandbar," "Returning Sails off Distant Shore," "Mountain Village after a Storm," "River Sky in Evening Snow," "Autumn Moon over Lake Dongting," "Evening Rain over the Xiao and Xiang," "Evening Bell of a Distant Temple," and "Fishing Village at Dusk."

From early on, poems praised the area around the Xiao and the Xiang for its scenic beauty. In the mid-eleventh century, a literati painter of the Northern Song dynasty (960-1127), named Song Di, began to paint eight scenes as a series. Although his paintings no longer exist, they appear to have scenes-not necessarily depicting a specific place, but a general view-enveloped in a smoky mist that this region is known for. This composition also may have incorporated a technique known as "flat (or level) distance," in which Song Di excelled, and which consists of an aerial format making it appear as though the horizon stretched out. After Song Di, the subject of the Eight Views of the Xiao and the Xiang became popular not only in China, but also in Korea and Japan. This theme also became the inspiration for the Eight Views of ?mi, which capture scenes around Lake Biwa in Japan.

While Returning Sails off a Distant Shore here represents the tradition of the Eight Views of the Xiao and Xiang, the skilful harmonization of ink tones and concise brushstrokes have beautifully captured the movement of the air and the contrast of light and dark and vividly depicted the two boats drawing near as wind fills their sails and the onlookers bustling around at the landing in anticipation of their return. This exquisite ink painting attributed to Muqi truly reflects the master's style. After the shogun Ashikaga Yoshimitsu, this work went into the possession of the warlord Oda Nobunaga (1534-82), and thereafter, was highly regarded by art connoisseurs and collectors in Japan.