Legends of the Kegon Sect

Text by by Junji Wakasugi, Department of Fine Arts

Here is a painting of a large boat moving across a stormy sea on top the back of a fierce dragon. Can you believe that such a dynamic work was painted in Japan more than 750 years ago? This fantastic sight may seem amazing and mysterious, but perhaps you may be more surprised to learn that this dragon is actually the transformation of a beautiful woman named Shanmiao (J., Zenmyo).

Shanmiao was the daughter of a rich man, who lived in a port town in China during the Tang dynasty (618-907). She fell in love with a handsome Korean monk from Silla, Uisang (J., Gisho), who was studying Buddhism in China. One day, while begging for alms, Uisang happened to visit Shanmiao's house, where she confessed her love to him. Uisang tried to dissuade her: "I am a monk so I cannot accept your feelings for me. Please open your heart and transfer those feelings to support the Buddhist teachings instead." 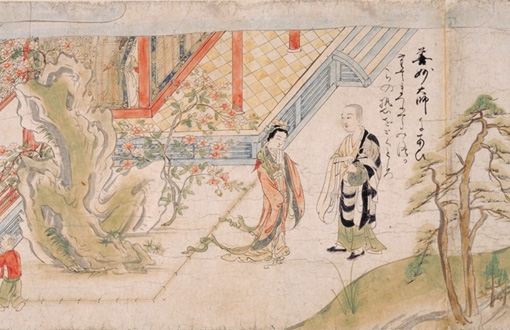 Eventually, Uisang completed his studies and was about to return to Korea. Shanmiao, learning of this, gathered all the Buddhist utensils that she had been collecting and rushed to the harbor, but it was too late. The ship had already set sail into the distance. Seeing this, the distressed Shanmiao threw her Buddhist utensil box in the direction of the ship and jumped into the sea. She then miraculously transformed into a dragon and protected Uisang on his voyage home.

This painting comes from Legends of the Kegon Sect (also known as Illustrated Biographies of the Kegon Sect Patriarchs), in seven volumes, which tells of the patriarchs of the Buddhist Hwaeom (J., Kegon) sect in Korea, Uisang (625-702) and Weonhyo (J., Gangyo, 617-686), based on their entries in a Chinese collection of biographies on early eminent Buddhist priests. This set of illustrated handscrolls belongs to Kozan-ji, a temple renowned for its beautiful autumn leaves in Toganoo, located in northwest Kyoto, Japan. Kozan-ji was revived, at the beginning of the Kamakura period (1185-1333), as a training center for the Kegon sect in Japan by the influential monk Myoe (1173-1232), who is thought to have initiated the making of these handscrolls.

The long, continuous narrative style of emaki, or illustrated handscroll, effectively draws its viewers into the story. Here, too, this scene-the climax of Uisang's tale-develops rhythmically from Shanmiao grieving over Uisang's departure, casting her Buddhist utensil box into the sea, then plunging herself into the waves and transforming into the dragon. A heightened sense of anticipation gradually develops for the viewer.

By the way, who do you think was Myoe's model for Shanmiao? In the first year of the Jokyu era (1221), after the shogun Minamoto no Sanetomo was assassinated and the Kamakura government experienced turmoil, the Retired Emperor Gotoba raised an army to overthrow the government. However, the government forces quickly brought down this revolt. This political struggle, known in Japanese history as the Jokyu Rebellion, led to the deaths of many courtiers in Kyoto, and during this time, many court women asked Myoe for help. Shanmiao may have represented these women to Myoe, and so he had them become nuns and built a temple named Zenmyo-ji (Shanmiao Temple), in which they could live. He may have also taught these women about Shanmiao's tale and converted them to the Kegon faith. We can imagine that these women, who lost their husbands in war, seeing this story, may have sympathized with Shanmiao and, through Myoe, devoted themselves to Buddhism.