In Japan, many imagine the Yayoi period as a peaceful time based on the gentle sound of the word "Yayoi," on images pastoral landscapes associated with rice fields, and elegant earthenware. In reality, however, the Yayoi period was the beginning of struggle over land and water resources indispensable for agriculture and the grazing and theft of agricultural surplus between groups. The archaeological discovery of corpses struck with weapons and wooden shields indicate that this age was in part a time of warfare. Up to that point, the members of this society were basically equal, so it was also in this period that those who ruled and those who were ruled came to be distinguished. The Chinese historical record, Wei zhi (Chronicles of Wei), in which the early Japanese appear, tells us that when a "great man" passed on the streets, the poor cleared away to the sides, prostrated on the ground, and listened and responded to their leader. The construction of graves and burial objects from this time also suggests the existence of small chiefdoms comparable in size to cities or counties today and a stratified society with a king-like ruler at the top, his kin, an upper class, and lower classes below.

How, then, were the bronze ritual bells, known in Japanese as dotaku, used in such a society?

There are many theories on this. Some came up with strange ideas such as that it was a sundial, that it was used to produce gold or to heat water for bathing, or that it was somehow related to secret Jewish practices. Today, the most prevailing view is that it was used as a ceremonial implement in agricultural rites. 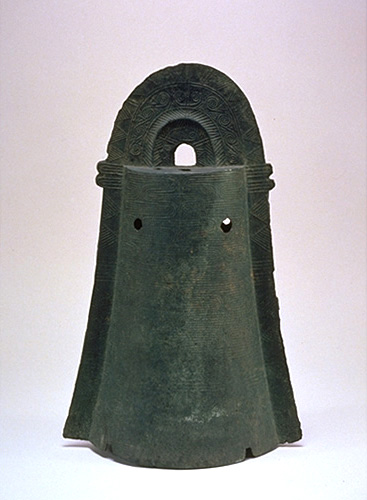 For the early Japanese, who lived on rice, the most important rites related to rice harvesting festivals. Unfortunately, the section on the Japanese in the Wei zhi does not tell us of such festivals. However, in the section on the Korean Peninsula, it mentions that the people offered their prayers to fierce gods and sang, danced, and drank continuously day and night, after sowing seeds in the fifth month and after harvesting their crops in the tenth month. These ritual bells seem to have been used at these times. There are also examples of dotaku cast with images. The most important motifs among these relate to griculture such as images of elevated granaries used to store rice or scenes of rice being pounded. Many of the animals on these bells also appear to be connected to rice agriculture. For example, although the Yayoi people ate mostly ate wild boar, illustrations of deer appear the most on dotaku. The Harima Fudoki (Local Record of Harima Province), compiled in the Nara period (710-793), tells us that a magical ritual of sowing seeds in deer blood was used to speed up the germination of rice plants and that people believed that the deer's life force helped in the growth of rice.

Deer and Four-Footed Animal,
Rubbing of a dotaku excavated from Shimane Prefecture

It is thought that deer came to play an important role in agrarian rituals in this way because the annual cycle of deer antlers-their new growth in the spring, their development over the summer and autumn, and their shedding in the winter-was connected to the regeneration, growth, and decay of plants. Come to think of it, remember, the popular anime, Princess Mononoke? The forest god that presided over the forces of life and death was a human-faced deer with many antlers.

Another interesting point about dotaku is that most were found buried together on isolated mountain slopes, away from villages. Some researchers suggest that they may have been preserved in the ground so that they could receive the Earth's life force while not in use. There are many things about the ritual use of dotaku that are still not clear. If we can solve these questions, I am sure that we could learn a lot more about the social organization of the Yayoi period, the base of Japanese society today.