Have you ever visited Kurama-dera, a temple in the northern hills of Kyoto? The Hanase Bessho Sutra Mounds, which I will now talk about, is located north of Hanase Pass, along a ridge that stands 700 meters above sea level, beyond the mountain path that extends from the front gate of Kurama-dera. This group of sutra mounds was built at the end of the Heian period, around the 12th century.

A sutra mound (kyozuka, in Japanese) is a small mound in which is buried an earthenware jar or stone chamber that stores a cylindrical bronze container with Buddhist scriptures in the form of handscrolls. Many sutra mounds were built all over Japan to bury sutras (Buddhist scriptures) from the latter half of the Heian (794-1185) to Kamakura (1185-1333) period. The reason for this is deeply connected with mappo (the "Latter Buddhist Law") the idea that the Buddha's teachings would deteriorate over time, after the death of the historical Buddha Sakyamuni. In Japan, mappo was calculated as beginning in the middle of the Heian period, in 1052, so courtiers and priests hand copied the sutras and buried them in order to preserve the Buddha's teachings. The period of preservation was believed to been a mind-boggling 5,670,000,000 years, in anticipation for the arrival of Maitreya (J., Miroku), the future Buddha, who would appear after the decline of Buddhism to save the world from chaos and confusion. The display of the sutra containers at the museum shows that the sutras were discovered before this time.

The relics from the Hanase Bessho Sutra Mounds were unearthed by accident during a forestation project from the Taisho (1912-1926) to the early Showa (1926-1989) period. The archaeologists, who took part in the early excavations of these objects, recorded the conditions of the archaeological findings from several mounds (numbers 1 to 7), so that we know today about these objects and the mounds. Let's take a closer look at Sutra Mound 1, where this sutra container (Illus. 1) was found. 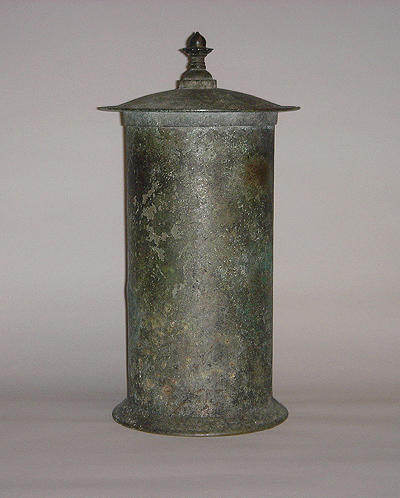 Sutra Mound 1 was built atop the ridge that stretches east from an isolated group of mountains. The mound was made of rocks piled in a circle, approximately five meters in diameter, in the center of which was a small chamber (see Diagram 1). From within this inner chamber was discovered this bronze container, which was stored in an earthenware outer container, a small but outstanding gilt bronze image of Bishamonten, a guardian deity of northern Kyoto, within a miniature cylindrical bronze shrine (Illus. 2), a bronze incense burner, a flower vase, and six plates. A Japanese mirror, short swords, and small Chinese Song-dynasty porcelain containers were also found within the pile of rocks. 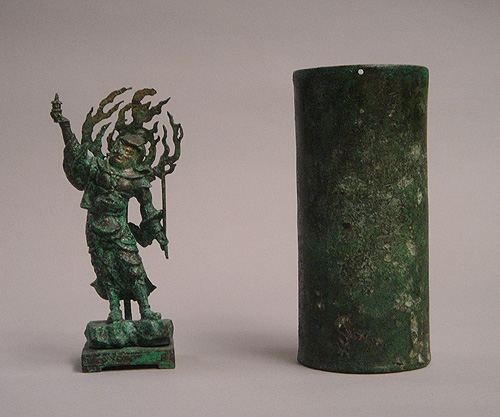 This stately sutra container with a roof-shaped lid is 37 cm in height and has an inscription that indicates that a low-ranking courtier by the name of Saeki and a nun had this container buried in the third year of the Ninpei era (1153). The other sutra mounds, scattered around the group of mountains, also date to this period in the mid-12th century. Most of the sutras within the sutra containers had deteriorated over the last 800 years, though it appears from the existing fragments that they are from the Lotus Sutra (Sutra Mound 3).

The third year of Ninpei-when Hanase Bessho Sutra Mound 1 was built-was the year that the warrior Taira Tadamori (1096-1153) died and his son Kiyomori (1118-1181) became the ruthless leader of his clan. Writings from this time show that peace and order in the capital of Kyoto was deteriorating and bloodshed was increasing. The H?gen and Heiji Rebellions were also just around the corner and about to usher in a period of transition when power changed hands from the courtiers to the warriors. Within this chaotic period, the courtiers may have created such sutra mounds in hope of securing their future.