If you ever come to the Kyoto National Museum, take a look at the pottery in the archaeology rooms. You will probably notice that the pottery from the Jomon (100th - 3rd C B.C.) and Yayoi (200 B.C.- 250 A.D.) Periods is reddish in color while the pottery from the Kofun Period (250-552 A.D.) is grayish. Can you see the difference in the photos below? 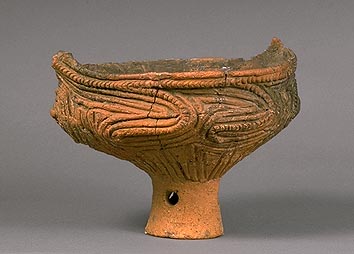 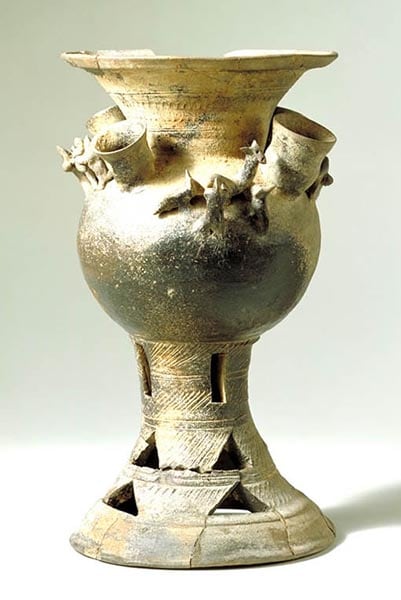 The grayish piece here is an example of sueki, a kind of unglazed earthenware that was made from the Kofun Period to the Nara Period (645-710 A.D.). These hard earthenware pots were baked at a very high temperature in special kilns (called "hole kilns") carved out of the sides of steep slopes. The technology for these kilns was brought to Japan from the Korean Peninsula in the 5th Century.

One of the most interesting pieces of all sueki pottery is this Decorated Sueki Jar, which was excavated from the Nishimiyayama Tumulus in Tatsuno City, Hyogo Prefecture. This footed jar was made in the 6th Century, almost 1500 years ago! Let's take a closer look.

The most appealing parts of this jar are the tiny figures of animals and people decorating its shoulders. Take a look at the close-up photo below:

This scene depicts four people. The two people on the right have their arms interlocked. Actually, they are probably sumo wrestling! This means that the two on the left are either referees or people cheering them on. Some people have said, "They're not wrestling, that's a man and a woman hugging!" But if that were true, it would be a little strange for there to be two onlookers!

A very old Japanese history book called the Nihon Shoki, tells the legend of two strong wrestlers named Taima-no-Kehaya and Nomi-no-Sukune who held the first sumo tournament in Japan. The winner of the match, Nomi-no-Sukune, died in a place very close to where this Decorated Sue Jar was found, so there may be a close connection between him and this jar! (The only problem is that the Nihon Shoki suggests that Taima and Nomi's sumo was not done by interlocking their arms, as shown here, but by kicking each other with their feet.) 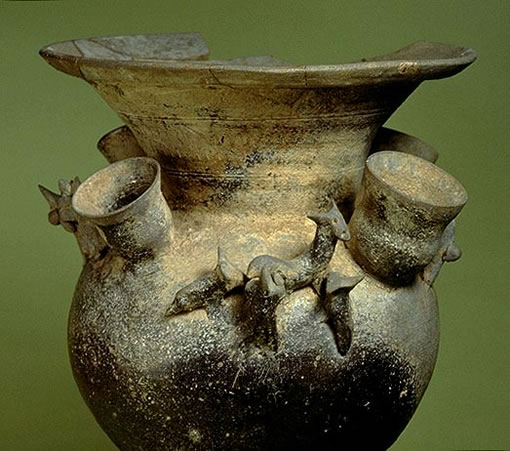 This photo shows a hunting scene with two dogs and a person chasing a deer. The long neck of the deer and the raised ears of the dogs, as if caught in mid-bark, make this scene seem very true-to-life! Scenes of hunting with hunting dogs also appear on dotaku (bronze bells) from the Yayoi Period.

There is another possible explanation of this scene. Some people think that this is a peaceful scene of a mother dog with her pups playing about her. The sense of tension in the figures, however, makes it seem more like a hunting scene. What do you think? 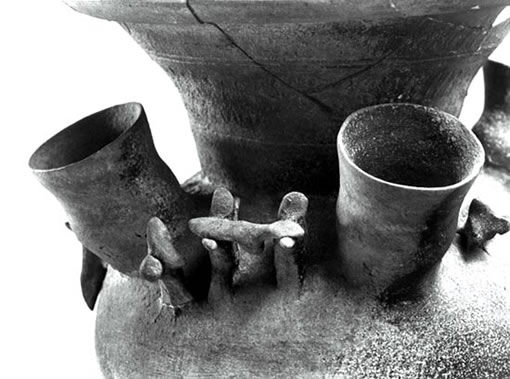 This photo shows a person carrying something on his back (on the left) and two other people carrying things on sticks (on the right). It is hard to tell what they are carrying. Perhaps it is a construction scene and they are carrying, say, dirt to be used for building a tumulus (a tomb formed like a small mountain). Or perhaps it is a continuation of the hunting scene and shows the hunters carrying home their prey.

There is one more small scene on the jar (not pictured) which has only one dog remaining. It too, was probably a hunting scene.

The site from which this jar was excavated is a thirty-five meter long tumulus with a squared off front and a rounded back. The rounded back has a stone chamber with a side entrance. Many pieces of sueki, including jars, bowls, and goblets, were found in this chamber. There were also harnesses for horses, iron swords, spears, and jewelry, such as glass beads and gold earrings. The tomb probably belonged to a clan leader who lived near Tatsuno City during the first half of the 6th Century.

Decorated jars like this have been found in various places Western Japan, especially Okayama and Hyogo Prefectures. In addition to sumo and hunting, jars like this portray scenes of cormorant fishing horseback riding and dancing giving us valuable insight into the daily life of people in the Kofun Period!