Mirror with Geometric Patterns and the Four Spirits

The mirrors we use today are made of glass that has been coated on one side with a thin layer of reflective silver or aluminum plate. This kind of glass mirror was first made in Italy in the 16th Century. As technology improved, these glass mirrors spread around the world. But glass mirrors are not the only type of reflecting mirror. In Japan, in fact, glass mirrors were not used until the late 19th Century, in the Meiji Period. Before that time, the Japanese used mirrors made of bronze!

These days, we know a lot about the physics of light, so we find nothing mysterious about the reflected image in the mirror or the relationship between the reflection and the reality behind it. In the old days, however, people did not understand such things, so mirrors were more than just everyday implements; they were thought to have spiritual powers! In the movie Orpheus, by French poet Jean Cocteau, the main character uses a mirror to go from the world of the living to the world of the dead. People must have thought that there was something supernatural or frightening about the images and world reflected in mirrors!

In Japan, numerous bronze mirrors have been excavated from the tombs of powerful people from the Yayoi Period (200 B.C.- 250 A.D.) and the Kofun Period (250 - 552 A.D.) and temples and shrines have great numbers of old mirrors that have been handed down for centuries. This shows us that the Japanese too thought that mirrors had supernatural powers. The Japanese used such mirrors for festivals and exorcisms--mirrors were a symbol of power!

The mystical connotations of Asian mirrors can also been seen from the patterns and inscriptions molded into the backs. Let's look at the patterns on one mirror and see how these patterns reflect the thought of the time in which it was made. This Mirror with Geometric Patterns and the Four Spirits is an example of a type of mirror that was made in great numbers in China from the end of the Early Han Dynasty to the Late Han Dynasty (from about the 1st Century B.C. to the 2nd Century A.D.), which corresponds to the Japanese Yayoi Period. Many of these mirrors were brought into Japan by way of Korea. 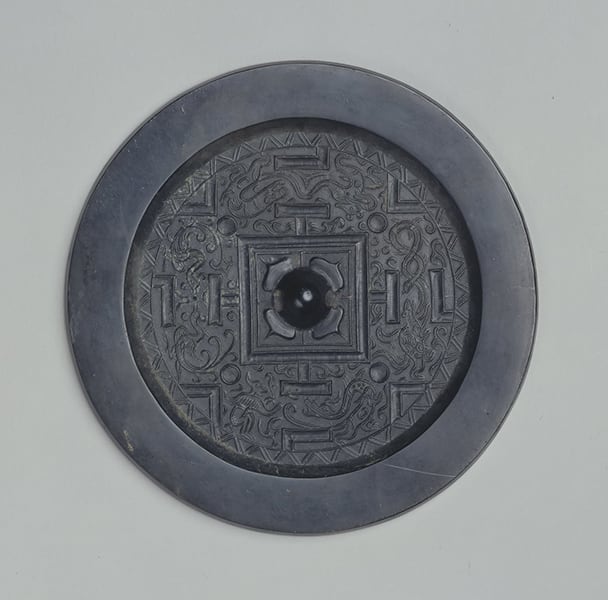 How exactly do the patterns on this mirror symbolize the "Round Sky, Square Earth" view? If you look at the mirror, you will see a square surrounding the central knob. This square represents the earth, while the thick circular rim of the mirror represents the heavens. The T-shaped motifs extending out from the center of each of the four sides of the square are pillars and beams that hold up the universe. The L and V-shaped motifs are devices that hold heaven and earth together. Between the knob and the border are many animals, the most important of which are a blue dragon, a white tiger, a red phoenix bird and a black wu (a tortoise intertwined with a snake). Together, these four animals make up the "four spirits," mythical gods who represent star constellations in the four quarters of the universe. The blue dragon represents constellations in the east, the white tiger in the west, the red bird in the south and the black tortoise-snake in the north.

Among the four spirits are spiraling patterns representing qi (ki in Japanese), a life energy that fills the universe. The ancient Chinese believed that if you lived in perfect harmony with the workings of the universe, things would happen as you wished. Perhaps people of the day thought that by owning a mirror representing the universe, they could get the same effect!

These kinds of mirrors often have inscriptions listing the happiness and good luck that will come to the owner. However, this good luck and happiness usually consists of long life, getting rich and moving ahead in the world. Don't you think these desires sound more human than godlike?