August is the month for Obon in Japan. Obon is the Buddhist Festival for the Dead, so most Japanese children visit the graves of their ancestors at this time. In Japan, the tradition of cremating the dead goes back to the mid-7th Century (the end of the Asuka period). Do you know what cremation is? This is the practice of burning the bodies of the dead instead of burying them whole. The ashes are then usually buried, but the graves contain ashes instead of bodily remains. A priest named Dosho who died in the year 700 A.D. in present day Nara Prefecture (in either Obara, Sakurai City or Kurihara, Asuka Village) was the first recorded person to be cremated in Japan.

The ashes of the dead are often placed inside a urn before being buried. The urn pictured below was made just for such purpose. 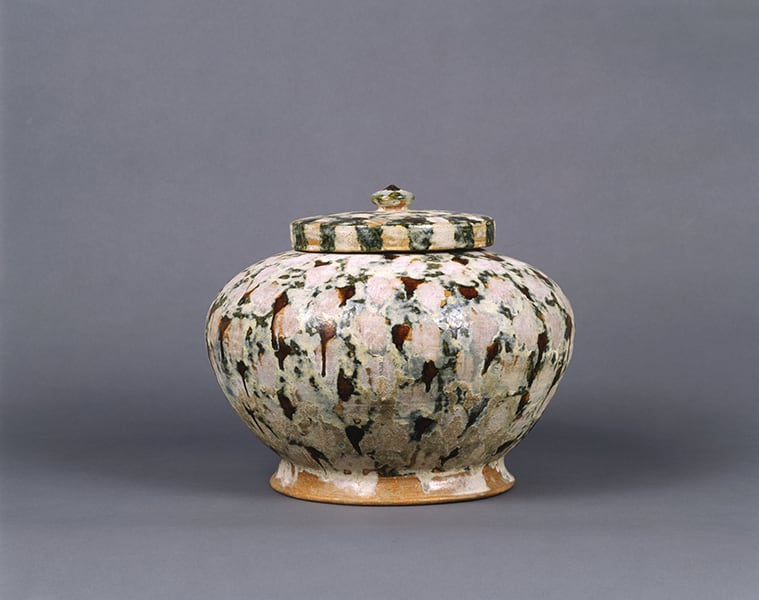 This urn is called the "Three-Colored Cinerary Urn" because it has three colors of glaze, green, yellow and white. This style of glazing came from China and was widely produced in Japan in the Nara period (710-794 A.D.). There are examples of three-colored glazed urns, plates, bowls, etc. from the Nara-period in the Shosoin Repository in Nara, Japan.

This particular urn was excavated from the Koyakuchi-cho, Ito-gun in Wakayama Prefecture. The background color of the urn is reddish in color. This is because there is a lot of iron in the clay. Most urns of this type have more whitish clay. This urn was found by accident, so we don't know much about the grave in which it was buried. We do know that it was originally found in a stone case, as shown in the photo below. 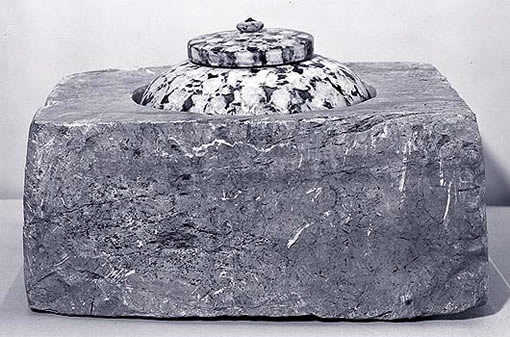 The case was made from two pieces of limestone, a bottom and a top. A cavity just the size of the urn has been carved out in the center. This type of stone case is very rare. I bet the grave that held this beautiful urn and its stone case was very carefully made!

There is naturally no name inside the urn, so we don't know to whom these ashes belonged. The ashes have been dated to the first half of the Nara period (710-794 A.D.). This is the largest of all the urns found from this period, so it is thought to have belonged to a person of influence living in this area. Or perhaps it was the grave of someone who worked at the Imperial offices in the Nara capital of Heijo but was originally from Koyaguchi and thus had his or her ashes buried there.

Sending ashes back to a person's hometown after death was a common practice in the Nara period. For example, a man named Ina no Omura was sent from Nara to be the governor of the Province of Echigo, present day Niigata Prefecture. When he became sick and died at the young age of 42, he was cremated in Echigo. His ashes were then placed in a luxurious gilded bronze urn and sent back to his hometown of Yamatoyamakimi no Sato (present day Anamushi in Kashiba City, Nara) to be buried. Echigo and Nara are over 600 km away from each other over mountainous terrain. I bet that Ina no Omura was lonely at his death being so far away from home!

Another example of someone whose ashes were sent back home after death was Takaya no Hirahito of Osaka. He was sent off to the province of Hitachi (present-day Ibaraki Prefecture) to work as a public official. We don't know how old he was, but he, too, died on assignment, so his ashes were sent back to be buried in his hometown of Taishi, Minamikawachi-gun, Osaka.

The Kyoto National Museum's collection of historic archaeological objects at the museum contains many other funerary urns. Some of them are plain, unglazed clay. Some are glazed green. Ina no Omura's urn is also in the collection. It is a spherical golden urn with the characters for "Ina no Omura" engraved into the cover. Can you make out the characters in the photo below? 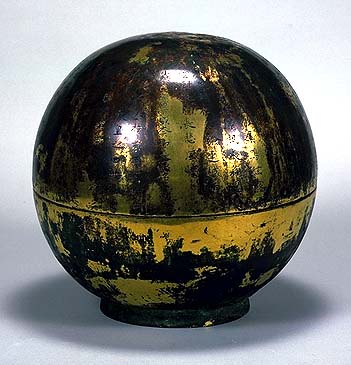 There are no bones or ashes left in these urns, but we should still remember our ancestors when we look at them.