Dragons are mythical creatures that have origins in China. The Chinese character for dragon, long (J., ryu), can be seen in the ancient oracle bone inscription, jiaguwen, which was created in the Shang dynasty from the 17th to 11th century B.C., as well as in the gold lettering on bronze vessels that were cast during the following Zhou dynasty (1100-256 B.C.), indicating the early connection between the ancient Chinese and dragons.

Huainanzi (The Nobles of Huainan), a compendium dated to the late second century B.C., introduces various types of dragons-feilong ("flying dragon"), yinglong ("small dragon"), jiaolong ("scaly dragon"), and xianlong ("primordial dragon")-from which birds, animals, fishes, and crustaceans evolved. In other words, the dragon was the origin of all animals, and its existence was thought of as a kind of creator god. Perhaps for this reason, dragons were described as having "nine similarities"-horns like a deer, head like a camel, eyes like a demon, neck like a snake, belly like clams, scales like fish, claws like a hawk, paws like a tiger, and ears like a cow. Truly a vision of creativity! Transforming robots on cartoons don't even come close in imagination. With these monstrous features, dragons reign over all other animals and became the most auspicious of beasts.

However, these magnificent creatures that were originally supposed to roam the sky came to be bound by the emperor's power and locked away within his imperial robe. From then on, the dragon became the symbol of the imperial ruler of China This robe, which the emperor wore during the most important ceremonies, had twelve motifs that symbolized the twelve virtuous qualities of a noble. 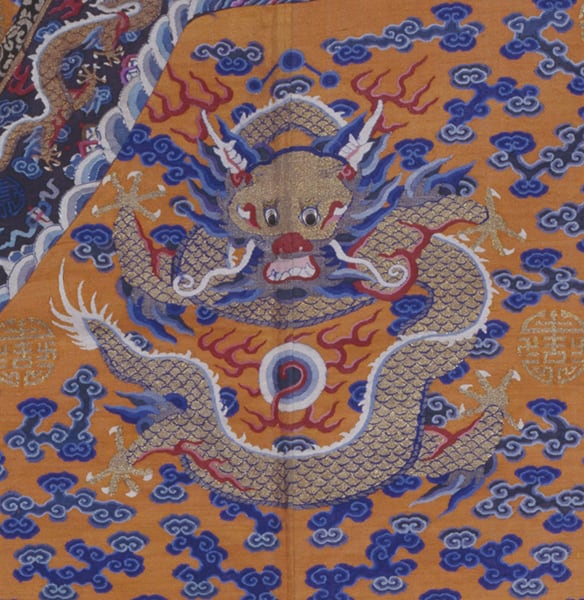 Among these motifs, the ever-transforming dragon represented the ability of a nobleman to rule flexibly according to the era. The twelve virtues were said to been established in ancient times by the legendary sage king Shun, again showing that dragon designs were created quite early, though at this point, they did not yet symbolize power and authority.

It was during the Tang dynasty (618-907) that dragons came to adorn the emperor's robe as the symbol of power. In 693, a high official was presented with a dragon robe. To receive such a symbol of power from the emperor was quite an honor. Later, there were those who wore robes with dragon designs as they pleased. In 1297, small dragon designs on the front or back of one's clothes were permitted, however, large dragons that covered an entire outfit were forbidden. In 1315, a regulation stipulated that only the emperor could wear a two-horned, five-clawed dragon motif. It was then that the dragon became a symbol of power.

The emperor's robes continued to be decorated with this two-horned, five-clawed dragon even into the Ming dynasty (1368-1644). Subsequently, in the mid-fifteenth century, the emperor's loyal subjects came to be bestowed robes with four-clawed dragons, which were called mang. 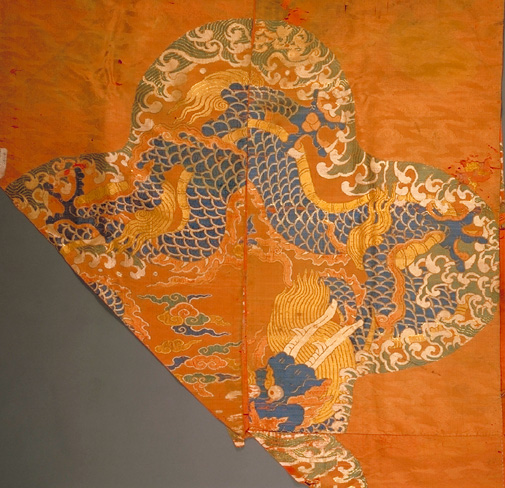 The feiyu, like the mang, had four claws; it also had fin-like wings on its torso and a fish-like tail. The douniu also had four claws, or in some cases, three claws, and a horn that curved outward like a water buffalo. All three of these dragon-like beasts became motifs on robes that the emperor presented to his retainers. Dragons were ultimately exclusive to the emperor, and mang, feiyu, and douniu, which resembled dragons, were made to look different, in order to differentiate the status of the wearer. In 1458, a prohibition against the misuse of the mang, feiyu, and douniu motifs was issued, and thereafter, several bans were established. I suppose in every age, there are people who want to put themselves above others. Finally, during the Qing dynasty (1644-1911), the emperor's retainers decorated their robes with a creature that looked exactly like a dragon, which they called mang. Perhaps the dragon, caught up in this power play, can no longer fly freely in the sky.