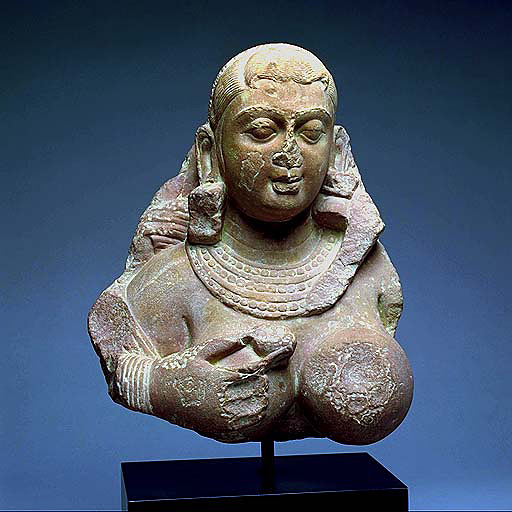 This bust originally decorated the walls surrounding a stupa. The reddish sandstone indicates that it may have been made in the Mathura area in Central India. The body of this large-breasted Yakshi is carved in high-relief (alto-relief). Yakshi were originally deities of the trees and forests in some native Indian religions, but they were later adopted by Buddhism as guardians of Buddhist thought; the figures were thus commonly carved around stupas. Yakshi are often depicted as a voluptuous, naked woman in various poses. The materials, size and style of this figure are very similar to three others found on a stone wall in the Indian Museum, Calcutta, which suggests that they might have been made in the same period by related artists. In her right hand, this Yakshi holds what looks like fruit, possibly a grape.