Advanced ticket reservations for this exhibition are not required. Exhibition dates are also subject to change. Updated information will be posted on this website and on the museum's official Twitter feed, so please check the latest information before visiting the museum in person.

Special Exhibition
Chanoyu: Tea in the Cultural Life of Kyoto

With the special support of

With the support of

With the special cooperation of

With the cooperation of

Kyoto Chamber of Commerce and Industry

Kyoto has long been a destination for people from across Japan and around the world. Visitors are drawn to the architecture of its shrines and temples, to its refined arts and crafts, and to its performing art traditions that include Noh and Kyōgen theater and dance. The city’s rich cultural heritage, both tangible and intangible, was nurtured over the thousand years that Kyoto was the country’s capital.
Throughout its long history, travelers from all walks of life have been welcomed to Kyoto with a spirit of hospitality, called omotenashi. It is this same sense of welcoming that is at the heart of Kyoto’s tea culture of chanoyu—commonly known as the Japanese tea ceremony—a tradition that developed in the ancient capital and continues to thrive in the modern city.
The whisked powdered green tea preparation method that laid the foundation for chanoyu came to Japan from China around the end of the Heian period (794–1185). Through the successive eras of the Kamakura (1185–1333), Nanbokuchō (1333–1392), and Muromachi (1392–1573) periods, tea traditions were gradually domesticated, taking on the form now recognized around the world as a unique symbol of Japanese culture. Kyoto has played a central role throughout the history of chanoyu and still serves as home to many tea practitioners and heads of the major tea lineages.
This exhibition introduces the culture of chanoyu in Kyoto through masterpieces from each historical age. We hope that these objects, carefully preserved and passed down from generation to generation, will provide a sense of the long tradition of tea in Kyoto and of the aesthetic sensibilities of its great tea masters. 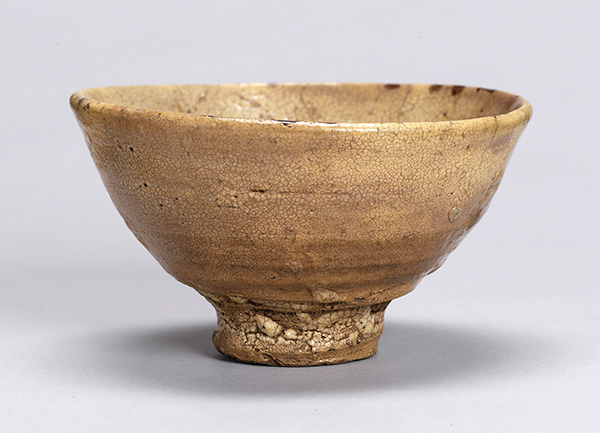 Introduction  An Invitation to Chanoyu

Chanoyu—the ritualized practice of preparing whisked powdered green tea—is recognized around the world today as one of Japan’s most distinctive cultural traditions. Though the custom of tea drinking was originally introduced from China, it has been adapted over the centuries to Japanese tastes, especially in Kyoto. For some in this ancient capital, tea drinking became a vehicle for the appreciation of precious imported Chinese objects. For others, tea was something that could be purchased “one cup for one coin” from vendors at the gates to the city’s many shrines and temples. As tea cultivation  flourished and tea became more widely available, Kyoto came to play a central role in the development of the unique cultural practice of chanoyu.
This exhibition features tea-related masterpieces passed down over time, primarily in Kyoto. These works help us understand how the practice of chanoyu as we know it first took root and how it evolved with the times, remaining vibrant to this day. 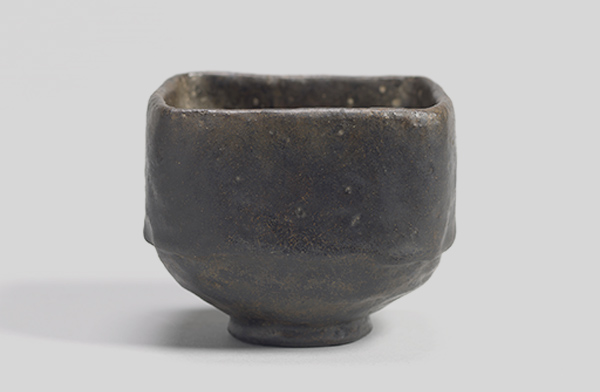 During the Nara period (710–794), diplomatic envoys to Tang-dynasty China brought tea plants and tea-drinking customs back to Japan, where they were embraced as the newest cultural practices of the day. Then, in the late Heian period (794–1185), Buddhist monks traveling to Song China brought back a method of grinding tea leaves into a powder using a stone mortar and mixing it with hot water. This preparation method, known as dianchafa (J: tenchahō), formed the foundation for the later development of chanoyu. With the spread of Buddhism, tea came to be used as a medicine and as a key component in ceremonies and religious offerings.
This section introduces written records and painted images illustrating how tea was brought to Japan and how the method of drinking tea we know today became established through the dissemination of the dianchafa practice. In addition, it examines the yotsugashira (“four hosts”) tea rite, through which early temple-based tea drinking traditions have been preserved into the present day. 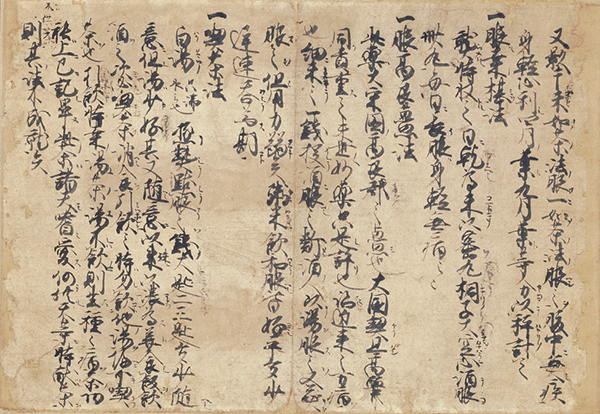 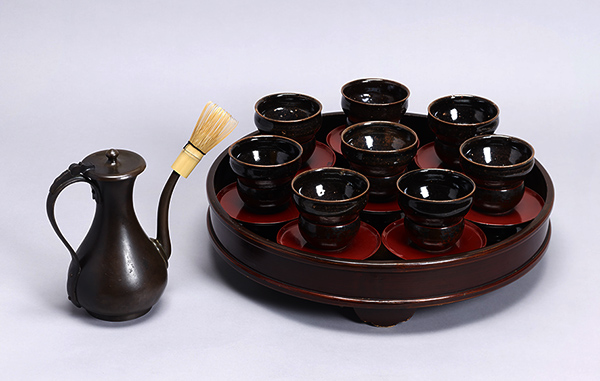 Part 2  Kaisho Tea and the Connoisseurship of “Chinese Things”

From the Kamakura period (1185–1333) onward, detailed protocols for tea preparation and tea drinking were set out by Zen Buddhist monks in codified regulations (J: shingi, Ch: qinggui) for daily monastic life at Zen temples. At the same time, a secular practice of enjoying tea for pleasure arose in the gathering halls (kaisho) of samurai residences.
These grand chambers were not reserved solely for enjoying tea; they were also spaces for literary and artistic events such as linked verse poetry (renga) and incense gatherings. Kaisho also served as venues for the display and appreciation of an array of imported cultural products brought to Japan through foreign trade. Such foreign objects, regardless of their place of origin, became known as karamono (literally, “Chinese things”).
As tea consumption spread not only among Buddhist temples but also among the court nobility and samurai families, with it came the domestic cultivation of higher quality tea and increased production volume. Before long, tea vendors began setting up shop in front of local shrine and temple gates, peddling tea “one cup for one coin” (ippuku issen) to the visitors passing through. This further contributed to the accessibility and popular enjoyment of the beverage.

Part 3  The Birth of Wabicha and Merchant Culture

In the Muromachi period (1392–1573), tea gatherings took place mainly in the kaisho gathering halls of samurai residences, where tea would be accompanied by the connoisseurship of implements imported from China or other foreign countries. At the same time, a different style of tea preparation was developing—one that embraced a humble spirit known as wabi and incorporated objects from everyday life.
The sentiment of wabi is famously expressed in Letter of the Heart (Kokoro no isshi) by Murata Shukō (1423–1502), who instructs: “Above all, dispel the boundary between Wa [Japan] and Kan [China].” Shukō counsels that revered foreign objects (karamono) should not be elevated as the primary utensils used for tea. Instead, he stresses the importance of being able to seamlessly integrate imported utensils with those made in Japan. Shuko further advocates for cultivating the quality of the “chilled and withered” (hiekareru) in one’s tea practice.
The development of this new way of tea, which became known as wabicha, was supported by the commercial activities of the merchant class, whose members promoted the creation of a variety of new implements for tea.

Part 4  The Great Unifiers and the Development of Wabicha

All the most powerful rulers of the land, not least the hegemons Oda Nobunaga (1534–1582) and Toyotomi Hideyoshi (1537–1598), were collectors of a prized class of tea utensils known as meibutsu, or “famed objects.”
Nobunaga’s esteem for tea utensils equaled that of the preceding Ashikaga shoguns. He did not treat the practice of chanoyu simply as a warrior-class social ritual but instead employed it directly as a means of demonstrating political authority. He even established a governing policy known as ochanoyu goseido (“rule by tea”), whereby he selectively granted licenses to specified retainers to practice chanoyu.
Following in Nobunaga’s footsteps, Hideyoshi also utilized the practice of chanoyu to spectacular political effect. He presented tea for Emperor Ōgimachi (1517–1593) at the Imperial Palace in 1585 and hosted grand tea gatherings at Daitoku-ji Temple and Kitano Tenmangū Shrine.
The tea master Sen no Rikyū (1522–1591), who served as advisor to Nobunaga and then to Hideyoshi, both embodied the tea traditions of the day and facilitated the creation of new utensils based on his own keen aesthetic sensibilities. It was Rikyū who inspired the development of a Japanese form of tea practice of unprecedented originality. 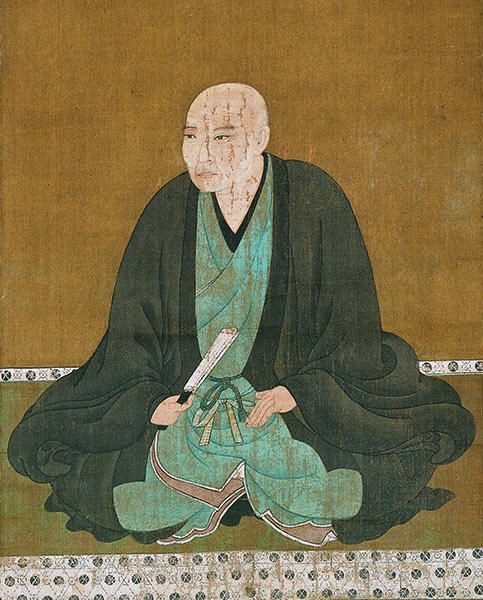 In the wake of its development under Rikyū and Hideyoshi, the practice of chanoyu expanded to better suit the various social positions of samurai, court nobles, Buddhist clerics, and townspeople.
The daimyo Furuta Oribe (1544–1615), who was a close associate of Rikyū's, moved to establish a daimyo-style tea while still preserving aspects of Rikyū’s teachings. At the same time, he was also commissioning tea utensils with distorted and irregular shapes known as “oddities” (hyōgemono), considered to reflect his personal taste.
Following Oribe, other distinctive trends in the aestheticization of tea practice developed from daimyo-class tea. This included kirei-sabi, an aesthetic of elegant simplicity favored by Kobori Enshū (1579–1647), magistrate of Fushimi in southern Kyoto, and the delicate and graceful hime-Sōwa style attributed to Kanamori Sōwa (1584–1656), son of the daimyo of the Hida Takayama domain.
Court nobles and priests also established their own forms of tea practice through their interactions with figures such as Enshū and Sōwa, as well as with Rikyū’s grandson Sen Sōtan (1578–1658). Additionally, the popularity of chanoyu increasingly spread among the merchant class, as notably demonstrated by the works and activities of the multitalented artist Hon’ami Kōetsu (1558–1637). 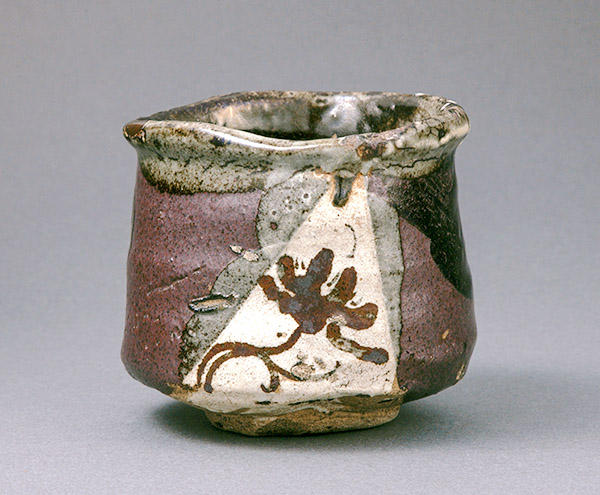 Part 6  The Diversification of Tea Culture: Sencha and Tea Cultivation

In the Edo period (1615–1868), new aspects of Chinese culture were again brought to Japan, including the steeped tea culture of sencha. Sencha was introduced to Japan by Chinese monks, including Yinyuan Longqi (J: Ingen Ryūki, 1592–1673), the founder of Manpuku-ji Temple in Uji. The practice of infusing loose leaf green tea had a great influence on the subsequent production of tea utensils and on the popularization of Chinese literati ideals.
In addition, improvements in tea cultivation techniques in Uji led to the production of higher quality tea in Japan. Uji, located southeast of Kyoto, has long been a famous tea-producing region due to its strategic location, its accessibility by land and water, and its beautiful views. The warlord Hideyoshi even visited Uji to observe the local harvesting of tea. In time, tea picking became a new scenic attraction in the already well-known Uji area. 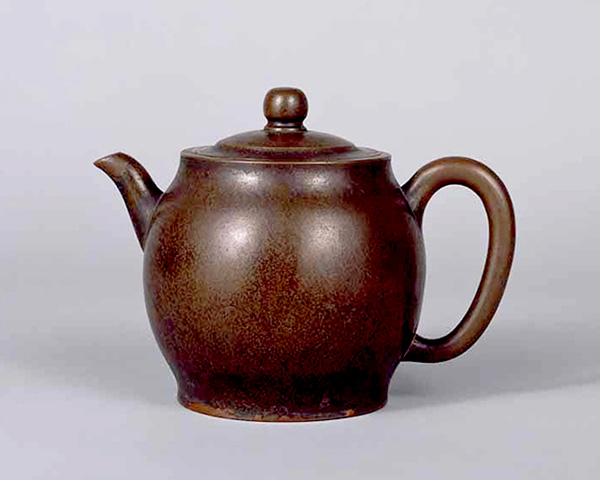 In the modern era, traditional Japanese culture was altered greatly in the name of “civilization and enlightenment” (i.e., Westernization), and chanoyu was no exception, as many tea utensils left Japan and made their way overseas. In this new cultural climate, the heads of the hereditary tea schools and other tea masters tested ways of revolutionizing chanoyu by creating novel styles of tea preparation suited to the new era, such as the ryūrei form, in which tea could be enjoyed while seated at chairs and tables that were more suited to a Western lifestyle. At the same time, chanoyu came to be valued as a method for teaching proper etiquette and was even introduced into school curricula.
In the modern era, influential figures in the political and business worlds also became interested in chanoyu, both practicing it for pleasure and collecting tea implements. In Kyoto, the activities of such modern tea masters, known as sukisha (literally, “devotees”) gave chanoyu new life. 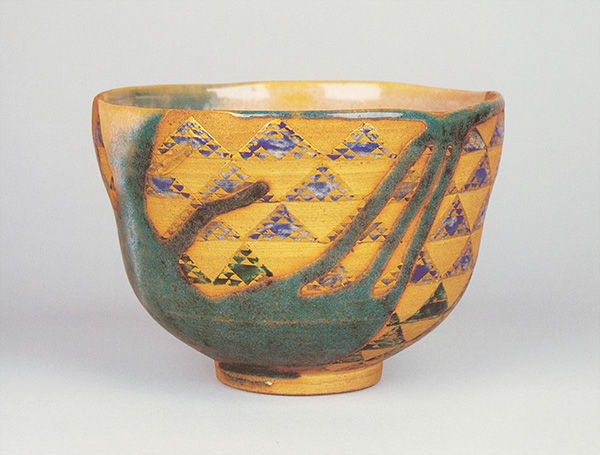